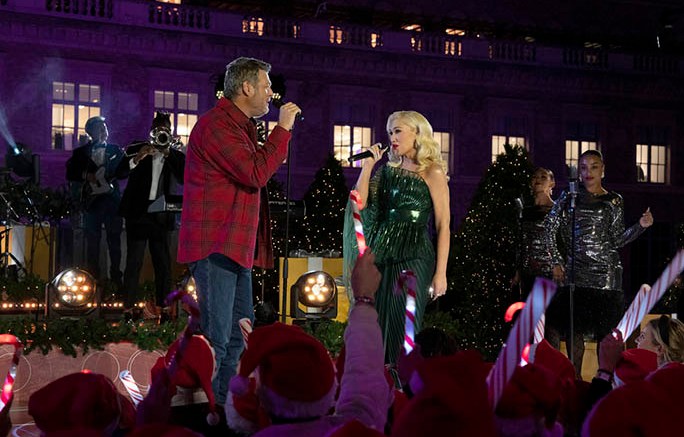 Gwen Stefani was a show-stopper while performing at NBC’s 2022 Christmas Tree Lighting on Nov. 30 in New York City. The Grammy Award-winning singer appeared onstage at Rockefeller Center with her husband Blake Shelton. The superstar duo came together for a duet performance of their holiday single, “You Make It Feel Like Christmas.”

Stefani was stylishly dressed to hit the stage. “The Voice” host had several outfit changes throughout the night. While singing with Shelton she wore a glittery green gown that fanned out on the chest, while the bottom portion featured a dramatic pleated skirt.

For another performance, the “Luxurious” hitmaker donned a silver metallic dress, which she paired with sheer tights. The shiny piece had thick ruffled straps, a square neckline and a voluminous skirt.

The angle of the photo didn’t allow for a peak at her footwear choice but it would be no surprise if the fashion designer completed her look with a pair of embellished pumps or sky-high platform heels.

Stefani eventually swapped her silver metallic dress for a red and white houndstooth jacket. The garment had oversized puffs near the shoulders and also included zipper dealing at the center. Stefani complemented the striking style with sheer white leggings.

When it comes to shoes, Stefani’s footwear complements her edgy, glamorous and eclectic personal style. For the red carpet and special occasions, the “Orange County Girl” musician often dons sparkly and embellished pumps and boots from top brands like Le Silla, Paris Texas and Casadei. She can frequently be seen in embroidered and fringed boots while off-duty, hailing from Frye, DSquared2 and Calvin Klein. For more casual moments, the musician also dons comfy footwear including Vans sneakers and Crocs clogs.