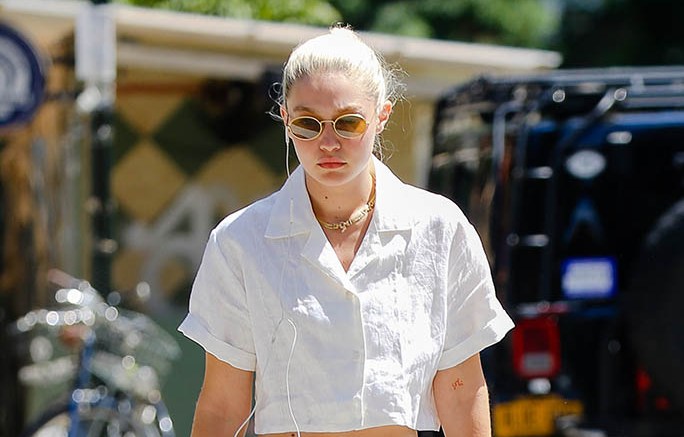 Divulging her everyday essentials, Gigi Hadid sat down with Vogue Italia in a video posted to the publication’s YouTube channel today. The almost eight minute long romp saw the Maybelline ambassador pulling everything from toiletries and kids toys to disposable cameras and cashmere swatches out of her black leather Prada “Cleo” bag.

The new mom’s top half consisted of a slouchy blue and white striped button down which she wore off-the-shoulder. The model paired the oversized piece with a white halter tank top. On bottom, Hadid wore equally baggy high-waisted distressed denim jeans and accessorized with a statement gold chain necklace and matching chunky rings.

The glimpse is quick, but a brief frame shows Hadid in laced-up chunky white “dad” sneakers with treaded rubber soles which she paired with long white tube socks. Chunky sneakers were first popularized in the 1980s for their practicality, comfort and stability. Though the sneaker style’s popularity slowed in the 2000s, chunky sneakers reemerged as part of the divisive “ugly” shoe trend in the late-2010s, capturing the attention of all genders.

Among a Lanegie lip sleeping mask, a tiny bottle of Cholula hot sauce, a psychedelic looking jewelry bag filled with jewelry, and a few pairs of versatile sunglasses, Hadid also carried around a zip-up leather Isabel Marant toiletries bag in emerald green which the model claimed she’d had for ages making it, “buttery soft.”

Hadid then pulled out three colorful swatches of fabric that the Ralph Lauren campaign star had picked up from her office. The colorful scraps allowed Hadid to segue into teasing her very own fashion brand venture focusing on cashmere wears entitled Guest In Residence. With a week away from the launch date, the video is a perfect medium for Hadid’s big announcement beyond a few well-received posts to her own Instagram.

PHOTOS: Check out some of Gigi Hadid’s best street-style looks.