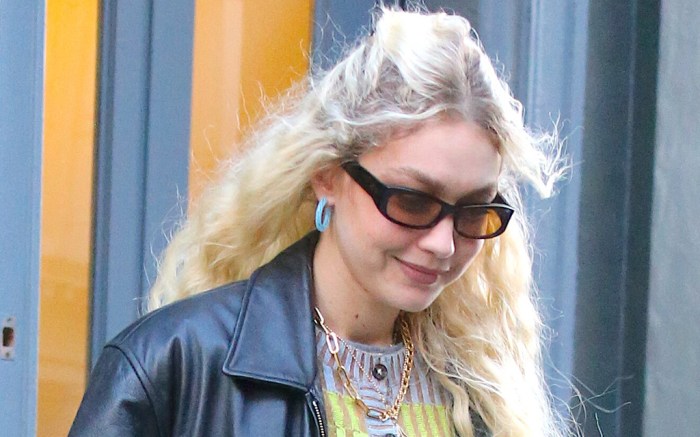 Like a good business owner should, Gigi Hadid stopped in at her Guest in Residence pop-up store in New York yesterday. Dressed in cozy clothes and chic cowboy boots, Hadid traversed SoHo, making the streets her runway.

Hadid’s look consisted of a black leather jacket worn over a colorful knit cardigan with a geometric pattern in neon hues. Adding layers upon layers in order to fight off the cold, the button down was worn atop a plain shirt that was tucked into a blue maxi skirt.

On her feet, the Tommy Hilfiger brand ambassador sported tan Western style boots with snipped toes and a shiny leather finish that transitioned into black stacked heels, ranging around 2 to 3 inches in height. The footwear was calf length that stopped just under the knees.

Cowboy boots are a rustic Americana shoe style marked by a pointed toe and an elevated stacked leather heel. Most often made of leather, cowboy boots have a shaft that extends almost to the wearer’s mid-calf. This style of boot often features artistic inlay and overlay designs as decorative features up the shaft and across the vamp. Though the style is still associated with the West, it has often come in and out of popular fashion.

Much like her clothing choices, Hadid’s shoe choices often veer on the casual side. The socialite frequently wears comfortable sneakers by Nike, Puma and Reebok, with which she collaborated on a capsule collection in 2018. Slides are one of her longtime favorites, which she’s worn from brands like Adidas, Ugg and Alexander Wang. Hadid’s also known for wearing show-stopping pumps, boots and strappy sandals by Stuart Weitzman, Christian Louboutin and Giuseppe Zanotti.