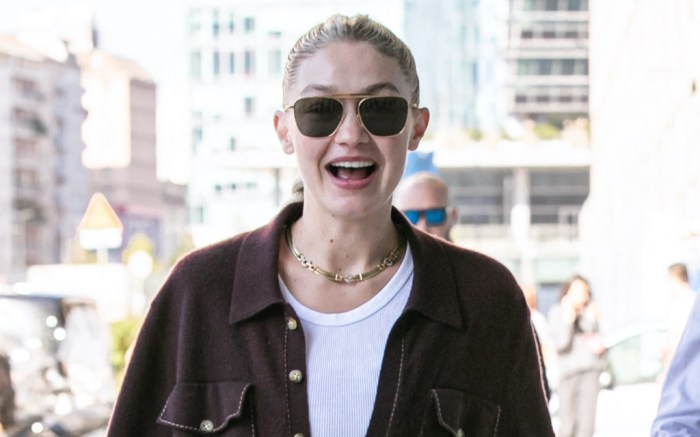 Right after appearing in runway shows for New York Fashion Week, the model was spotted in Milan. She stepped out on Thursday to go to Versace’s headquarters. For her outing, Hadid wore a jumpsuit from her new line, Guest in Residence. Her brown coveralls, made up of 100 percent cashmere, featured white stitching and gold hardware throughout the garment.

Hadid added a white cropped tank top under the jumpsuit and accessorized with a chunky necklace, aviator sunglasses from Amavii and a brown ostrich crossbody bag from Loro Piana.

The mom to 2-year-old Khai added cool but casual footwear to complete her outfit. She wore a pair of beige high-top sneakers from a Converse collaboration. Her Converse x Kim Jones Chuck 70 sneakers included a transparent cage that encased the shoe, as well as a platform sole.

Much like this outfit, Hadid’s shoe choices typically run on the casual side. The Maybelline muse often wears sneakers by Converse, Nike, Puma and Reebok, which she collaborated with on a capsule collection in 2018. Slides are one of her longtime favorites, which she’s worn from brands like Adidas, Ugg and Alexander Wang. However, Hadid’s also known to style show-stopping heels, especially pointed-toe pumps, boots, and strappy sandals by Stuart Weitzman, Giuseppe Zanotti and Christian Louboutin for formal occasions.