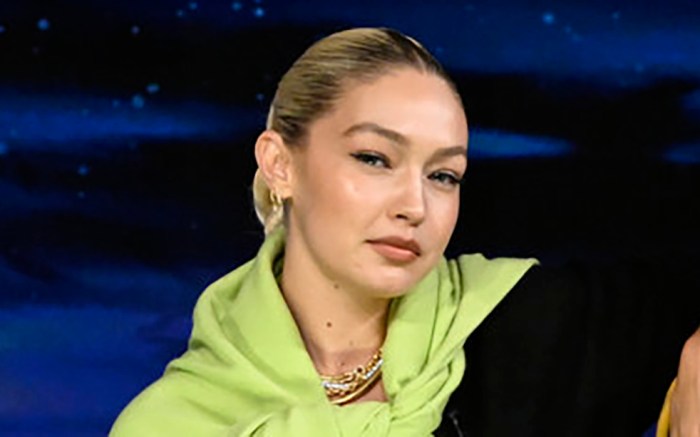 Gigi Hadid chatted with Jimmy Fallon on “The Tonight Show” yesterday. They talked all things cashmere with the new release of her clothing brand, Guest In Residence. From socks to sweaters and headwear, Hadid discussed the significance and history behind the brand and even threw some of the socks out to the audience.

The model dressed in a set from her own collection, consisting of a black long-sleeve sweater, which she left slightly open, and trousers made of the same material. Both the top and bottom were slightly oversized for a relaxed feel. The Tommy Hilfiger ambassador claimed she was the coziest she’d ever been on television.

Hadid took a maximalist approach to accessorizing the all-black ensemble. The star styled stacked chains in varying lengths, bangles, chunky rings and small hoop earrings. The runway star wore her blond hair slicked back into a braided ponytail while her makeup was kept natural.

Hadid zipped up shiny black boots just in time for fall. The classic ankle style was sharp and sturdy with a simple silhouette and angular heels that acted as a great canvas for Hadid’s Guest In Residence colorful cashmere socks.

Much like her clothing choices, Hadid’s shoes also veer on the casual side. The socialite frequently wears sneakers by Nike, Puma and Reebok, which she collaborated with on a capsule collection in 2018. Slides are one of her longtime favorites, which she’s worn from brands like Adidas, Ugg and Alexander Wang. Hadid’s also known for wearing show-stopping pumps, boots, and strappy sandals by Stuart Weitzman, Christian Louboutin and Giuseppe Zanotti.

PHOTOS: Click through the gallery to see some of Gigi Hadid’s best street style looks.