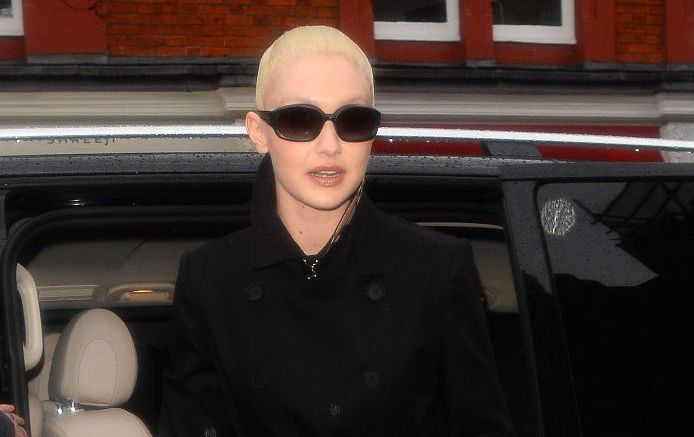 Supermodel Gigi Hadid was seen alongside her sister Bella Hadid walking the streets of London today with a striking new look.

The candid photo of the pair shows Bella and then Gigi stepping out of a car, walking side by side in two completely different outfits. Gigi shows off her silver-blond locks tied back in a bun. The social media star donned a long black Burberry trench and the brand’s black chunky sneakers with a slight platform and rounded toe.

The model’s black sunglasses completed the outfit’s “Matrix”-style inspiration as it was very militaristic, leaning on references from the futuristic film. Gigi’s platinum blond hair added a stark contrast to her typical golden locs, giving the model a slight edge. he all-black in contrast with the model’s wild hair is an intense statement.

Hadid is well-known for her extensive modeling career. From walking for Victoria’s Secret to Versace, the model is quite versatile, fitting almost every concept. The apple doesn’t fall too far from the tree. The Hadid sisters take after their mother in the modeling world. Gigi started modeling at a young age thanks to her mother Yolanda Hadid’s influence and has been modeling beside her younger sister ever since. Even their brother Anwar Hadid has gotten in on the family business, modeling for brands like Valentino and for magazines like Vogue.

This look, while simple, really packs a punch.

See more of Gigi’s street style through the years.