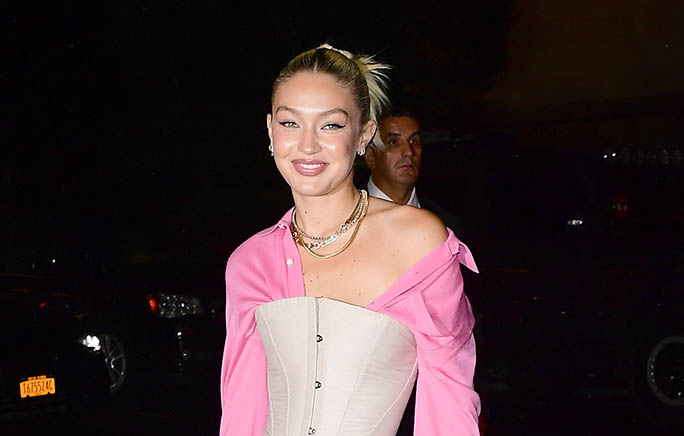 Gigi Hadid painted the city pink in honor of the launch of her new knitwear label Guest in Residence. To celebrate the new fashion venture, the supermodel hosted a star-studded party at Saks L’Avenue in New York City on Tuesday night. The runway sensation was joined by her sister Bella Hadid, Emily Ratajkowski, Precious Lee and celebrity stylist Law Roach.

Of course, Gigi brought her fashion A-game for the big night. The media personality put a street style spin on a business-chic fashion moment. Gigi wore a Barbie-pink button-down shirt that was styled off one shoulder. She teamed the vibrant staple with a nude corset top and white cargo-style trousers. The baggy bottoms had distressed detailing along the side seam and on the hem.

The 27-year-old socialite accessorized with layered choker necklaces and a pink Miu Miu Wander bag. Gigi styled her hair in an updo and opted for soft natural makeup.

Sticking to a Barbiecore aesthetic, Gigi completed her look with a pair of hot pink pumps. The silhouette peaked out underneath her pants and appeared to have a sharp, elongated triangular toe.