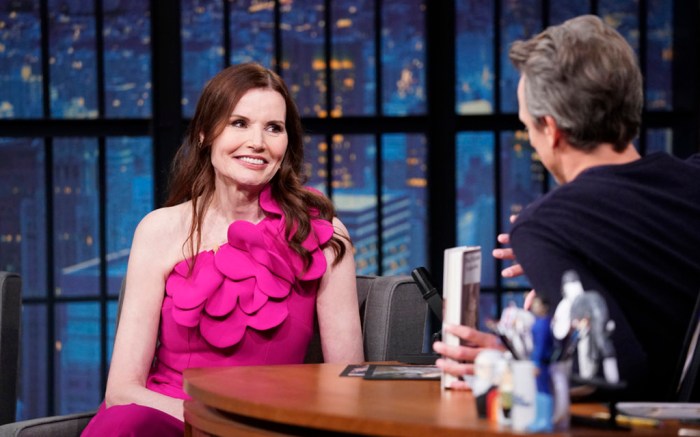 Clad in vibrant pops of color, Geena Davis sat down on “Late Night With Seth Meyers” yesterday to talk about her new memoir, “Dying of Politeness.” The “Beetlejuice” actress wore a fuchsia pink sleeveless Peggy Hartanto “Perimeter“ jumpsuit embellished with blooming floral appliqués that traveled up the one-shoulder asymmetrical bodice.

The bottom of Davis’ jumpsuit consisted of wide legged pleated pants that allowed the gender equality advocate a range of free flowing movement and comfort. Jumpsuits were first created in the early 1900s for people who were, yes, literally jumping out of planes. The style first transferred over to the fashion scene in the 1930s, but was mostly utilitarian (a la Rosie the Riveter) for several decades.

The author sparingly accessorized with a few gold earrings that brought on the bling and wore her long brown pin straight hair down parted in the middle. Much like her hair and jewelry, Davis’ makeup was also kept simple and chic.

For footwear, the starl stepped into sleek bright orange pointed-toe heels that streamlined the outfit, while offering up a whimsical neon hue. The pump style, while not all that conventional in color, is a classic choice that many celebrities love for red carpet appearances.

In addition to being a celebrated actress, she is the founder of The Geena Davis Institute on Gender in Media. Davis’ book, which was inspired by the star’s acting career and a near-death experience she had as a child, is available now.

PHOTOS: From the 1920s to Today: High Heels Through the Decades.