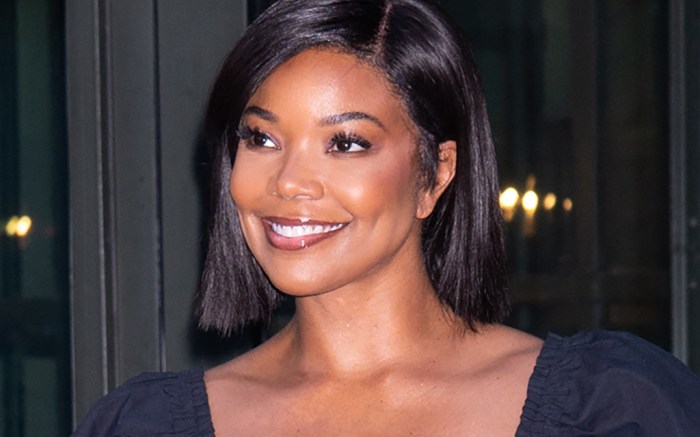 Gabrielle Union was photographed stepping out in New York today dressed in an all-black ensemble. The actress, who is currently on a press tour for her new movie “Strange World,” opted for a voluminous dress and lofty footwear.

Union’s dress was a midi-length style featuring exaggerated balloon sleeves and a sweetheart neckline. The garment was adorned with groups of decorative flowers on the bodice and hips just below the fitted waistline.

Tapering outwards, the skirt of Union’s dress was a pleated ample style that billowed as the actress moved. To finish off the look,  the “Bring It On” star embellished every other finger with dazzling silver and gold rings and wore her dark brown tresses in a chic bob styled in a sweeping side part.

Union hit the streets of the Big Apple in black platforms with peep-toe detailing and sharp stilettos ranging from 3 to 4 inches in height. The platformed construction helps compensate for the height of the heel, allowing for more height than a traditional pump without any added discomfort.

Like her clothing, the 50-year-old tends to gravitate towards a few frequented simplified styles for footwear. On and off the red carpet, Union can usually be found wearing thong sandals by Magda Butrym, By Far, and Gia Couture’s collaboration with Rosie Huntington-Whiteley.