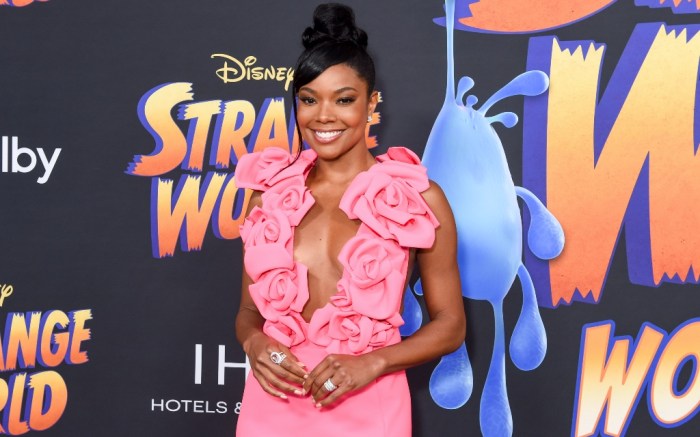 It was a family affair for Gabrielle Union on Tuesday night.

The “Bring it On” alum hit the red carpet premiere of Disney’s “Strange World” in Los Angeles with her husband, Dwayne Wade and their 4-year-old daughter, Kaavia. To the event, Union wore a bright pink dress from Valentino. The garment featured a plunging neckline surrounded by several large floral appliques. Union added a few sparkly rings from Tiffany and Co. to take the look to the next level.

The “Cheaper by the Dozen” actress added height to her frame with a pair of platform shoes. Though barely visible under the hem of her dress, the towering platforms appeared to have a square-toe design in a soft pink color, similar to the shade of her dress.

The couple and their young daughter went with a matching theme for the event. Wade wore a black suit with a black turtleneck paired with bright pink sneakers. Kaavia wore a black puffy wrap dress with black Dr. Martens boots, and carried a small hot pink top-handle bag with stud detailing.

Check out this gallery to see more of Gabrielle Union’s chic street style looks through the years .