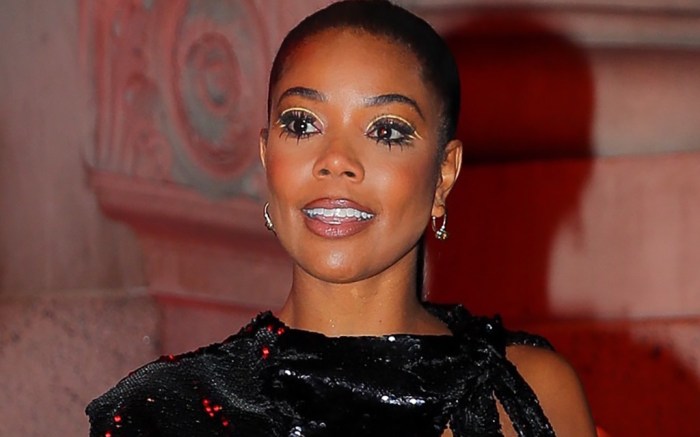 Gabrielle Union chose a sparkling outfit to attend the preview of Broadway’s “The Collaboration” at The Samuel J. Friedman Theatre in New York on Nov. 29. The “10 Things I Hate About You” star was clad in a sequined JW Anderson ensemble with sharp pumps.

Union’s dress was sleeveless, featuring a slouchy sequin mock-neck bodice draped up and over the actress’ shoulder and tied in place, the excess fabric left hanging. Sparkling sequins transitioned into a black fabric cut into an asymmetrical skirt that started high on the hips creating a train-like effect.

Simple but chic, Union hit the town in a classic pair of black slingback pointed-toe pumps for the night. The staple shoes were fitted with sharp stiletto-style heels, about 3 to 4 inches in height. Perfect for any occasion, the shoe style is a constant in many celebrities’ wardrobes, including Union’s.

Like her clothing, the 50-year-old tends to gravitate towards a few frequented simplified styles for footwear. On and off the red carpet, Union can usually be found wearing sandals by Magda Butrym, By Far, and Gia Couture’s collaboration with Rosie Huntington-Whiteley. She’s also known for wearing shoes from Paris Texas, Tamara Mellon, and Tabitha Simmons. While off-duty, Union prefers athletic sneakers by Adidas, Reebok or Nike.

In a similar manner, Union was all about the glamour at the 2022 Gotham Awards, the star clad in a velvet Fendi gown from the Italian brand’s spring 2022 couture show which was inspired by ancient Rome and the “celestial power.” The high-neck velvet gown was complete with a dramatic vignette of a Roman soldier and hidden heels.