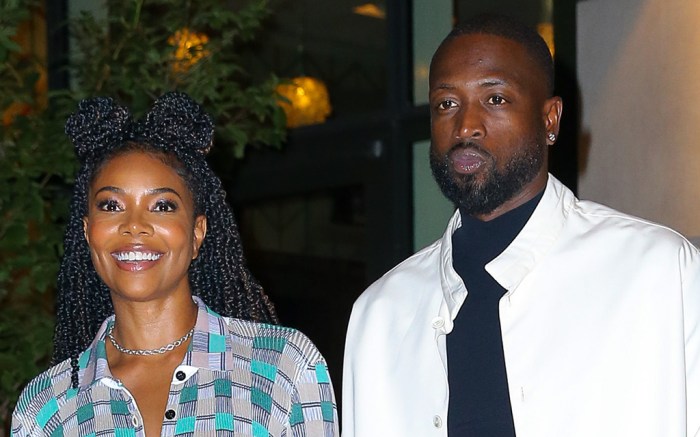 Gabrielle Union and her husband Dwyane Wade were photographed leaving their hotel in New York yesterday night, with the couple hitting the city streets in their most comfortable wears.

Union dressed for the drop in temperature, shrugging on a cozy extremely long sleeved knitted button up cardigan riddled with a vibrant geometric pattern in turquoise on a grey background. The “10 Things I Hate About You” actress left most of the buttons open except for one, the star effectively changing up the silhouette, while upping the risk factor.

The high waisted maxi skirt Union wore, much like the top, also featured a square pattern, this time in a dark blue, set on a grey background. The garment’s hem was trimmed in pink with a wavy lettuce look, the bold hue breaking up all the blue squares and grey backgrounds.

Held to the side, Union carried a glossy black leather bag and accessorized with a sturdy silver chain round her neck. She wore half of her braids in space buns, leaving the remaining hair down.

While her outfits reflected the chill in the air, Union’s black Anny Nord chunky mesh slingback platform sandal reminisced on sunny summer days and warmer weather. The Y2K style consisted of thick straps crossing over the tops of the thespian’s feet, securing them in place, accompanied by elevated  platforms that added a couple of extra inches to Union’s look.

Like her clothing, the ever fashionable actress tends to gravitate towards a few frequented simplified styles for footwear. Union usually wears thong sandals by Magda Butrym, By Far and Gia Couture’s collaboration with Rosie Huntington-Whiteley. She’s also known for wearing strappy sandals and tall boots by top brands, including Paris Texas, Tamara Mellon and Tabitha Simmons. While off-duty, Union prefers an athletic sneaker usually by Adidas, Reebok and Nike.