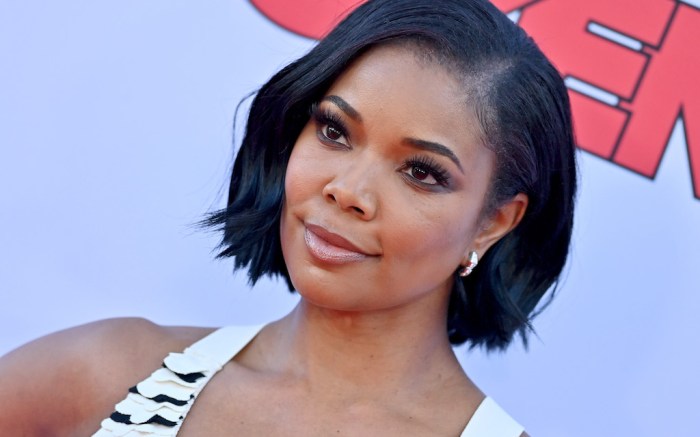 Gabrielle Union strutted her stuff in an Instagram video, showing off in a green gown today.

The actress can be seen in the V-neck sweater dress that featured plenty of cutouts. She accessorized with a couple of chunky gold rings and kept her hair up in a high pony cascading down her back as she looked away from the camera with a smile. The post reads, “When I’m tasked with debating an idiot 🚶🏾‍♀️🚶🏾‍♀️🚶🏾‍♀️👋🏾🥰 No Thank You. @nyandcompany 🔥🔥”.

Moving quickly through the room was no challenge for Union, until she nearly had a collision with a vase after she turned her head away to glance at the camera. She quickly recovered like a pro and laughed it off while making her way in heeled sandals. The shoes, which matched her skin tone, featured a strap around the toebed and several thick links around the midfoot. Union made the effort to stick to neutrals and her shoes are a prime example of the versatility of a nude sandal.

Union is a collaborator with New York & Co. and shared the behind the scenes video from her photoshoot after recently modeling the Laha dress for the brand’s Instagram page.

Coming off of her film release “Cheaper By the Dozen” — a premiere she attended last week with her family — Union posted a photo on Instagram that showed her with husband Dwyane Wade enjoying a wine night with The Roots Fund. For her outfit, Union went with a fiery red flowy dress that was floor-length and had two thick bars of fabric in the middle of the garment for coverage. The piece also had long sleeves for a tidy finish. The star finished off the whole affair with green sandals.

Click through to see Union’s style evolution over the years.

Step into the perfect nude sandal for you.