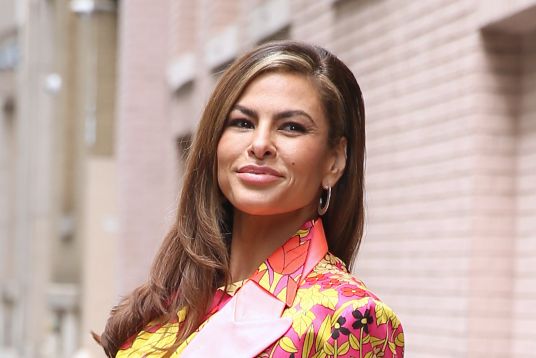 For the June 28 appearance, Mendes wore a vibrant blue floral Saloni dress that was made for standing out. The sleeveless A-line satin dress incorporated an orange floral print with a statement pleated skirt and a mock neck top that tied at the back. Mendes paired the look with gold metallic platform sandals featuring an open toe and an ankle strap. The actress accentuated her waist with a gold metallic belt, which echoed her choice of footwear.

While on the show, Mendes chatted about her long-term partner Ryan Gosling’s role as Ken in the upcoming “Barbie” live-action movie. She described seeing him in the role as causing the 14-year-old in her to swoon.

“I feel like my man has started like a real Renaissance — like a Kenaissance,” she said on the show to applause. She also confessed to keeping his Ken underwear from the movie, which is visible in the now-viral image of Gosling in character.

Mendes has been a big fan of mixing vibrant florals and metallics this season. While guest starring on “The View” in May, the actress wore a pink and yellow floral dress with a matching blazer and 6-inch silver metallic block heels. Notably, the Christopher John Rogers look also featured a pleated skirt and a statement waist-defining belt. As they say: If it isn’t broken, don’t fix it.