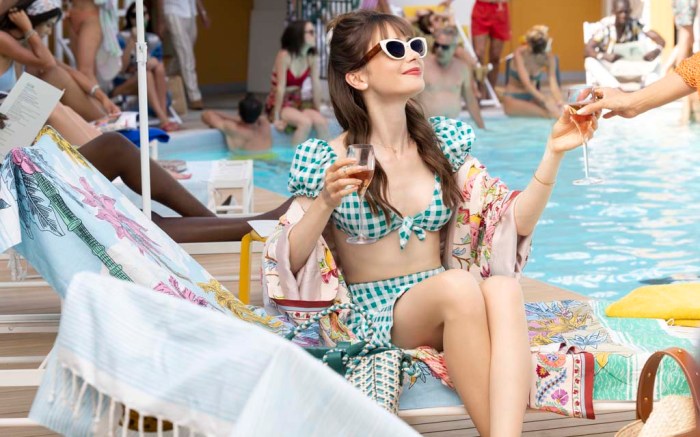 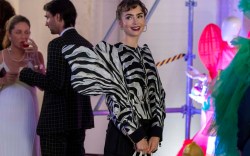 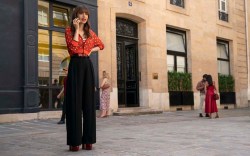 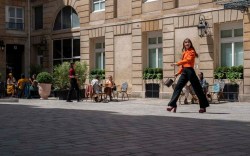 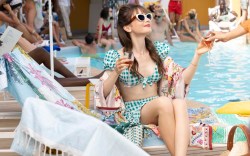 Netflix’s “Emily in Paris” Season 3 is not quite here yet, but already, Emily is back with her signature whimsical fashion.

Last season left some cliffhangers. Spoiler alert: Emily (played by Lily Collins) is faced with a decision to stay in Paris as Sylvie (Philippine Leroy-Beaulieu) decides to leave Savoir and start her own company, or go back to Chicago with her boss (Kate Walsh). Plus, her love triangle continues with Gabriel (Lucas Brave) and Alfie (Lucien Laviscount.)

What we do know so far, however, is that Emily will have another love affair, and this time it’s with platform shoes. In scenes from Season 3, she can be seen wearing multiple styles, curated by costume designer Marylin Fitoussi, including a pair of sky-high turquoise Mary Jane platforms paired with a pink feathered jacket. In another colorful look, Emily pairs yellow plaid-printed platforms embellished with an crystal heart with floral-printed knee-high socks, skirt and matching yellow coat.

And in what may be her most conservative and realistic office attire yet, Emily can be seen in episode 3 of the upcoming season in burgundy platform patent leather pumps with wide-legged black pants and a cropped orange jacket.

In previous seasons, famed costume designer Patricia Field was a costume consultant for creator Darren Starr’s “Emily in Paris.” The two also worked together on “Sex and the City” so it’s not surprise that the Netflix show has become one of TV’s most-fashionable shows as of late — albeit  mixed reviews. Some describe Emily’s looks as absurd, over-the-top, kitschy, and certainly not French.

The colorful, mixed prints and towering heels has been Field’s bread and butter since the ’90s when Carrie Bradshaw was TV’s hottest fashion girl. When it comes to style now, Field isn’t thrilled with today’s trends.

“I don’t want to be the bearer of bad news. I feel that it’s not only fashion, it’s even the cars. It’s either gray, black or white. There isn’t a colorful car. There isn’t colorful fashion. It’s sweatshirts and sweatpants and jeans that are ripped,” she told FN earlier this year. “It’s, to me, a depression mentality. And I like fun and positivity and looking forward to happiness [in clothes.]”

The show’s third season will launch on Dec. 21 on Netflix.

To see more of the best fashion from “Emily in Paris” Season 3, click through the gallery.