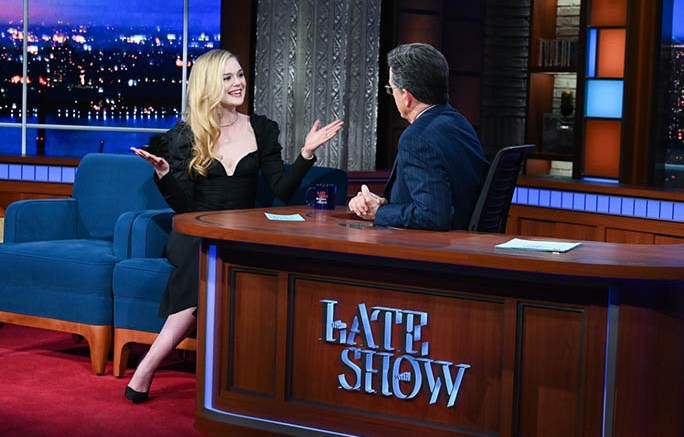 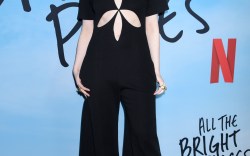 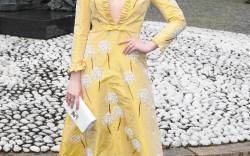 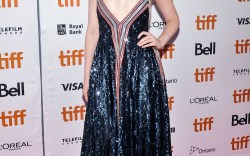 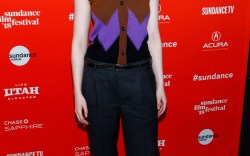 Elle Fanning showcased her sleek and feminine style while appearing on “The Late Show With Stephen Colbert” on Wednesday. The actress stopped by the talk show to chat about her new Hulu series, “The Girl From Plainville.” The show follows the true story of Michelle Carter’s “texting-suicide” case and explores her relationship with Conrad Roy III and the events leading up to his death and Carter’s conviction of involuntary manslaughter.

The “Maleficent” star arrived in an ’80s-retro ruched dress that was selected by stylist Samantha McMillen. The garment was complete with puffy sleeves and a thigh-high center split. Fanning complemented the number with round black frames, a gold choker necklace and stacked bracelets. She styled her signature flaxen locs in soft waves and opted for soft glam with a neutral pout.

To complete everything, Fanning finished off her look with a black pumps. The classic silhouette included a triangular pointed toe and a sharp stiletto heel. The high heels rounded out her look perfectly and added another eye-catching detail.

Speaking about her role as Michelle Carter in “The Girl From Plainville,” of which its “texting suicide” case was the subject of national attention in 2014, Fanning shared, “I think that this case was a very ripped from the headlines case and ended in the most tragic way that it could. I had to make sure that everyone that was involved was really telling the story in a sensitive way, because I think that it could be very easy to exploit or sensationalize a story like this,” Fanning explained.

Fanning also opened up about her role in the comedy series, “The Great,” which is also available to stream on Hulu. “I had to learn to embarrass myself. I think I have a very animated face. I make a lot of faces. When you’re working you can’t be thinking about how you look,” Fanning said.

See Fanning’s style through the years.

Complement your ensemble with a pair of classic black pumps.