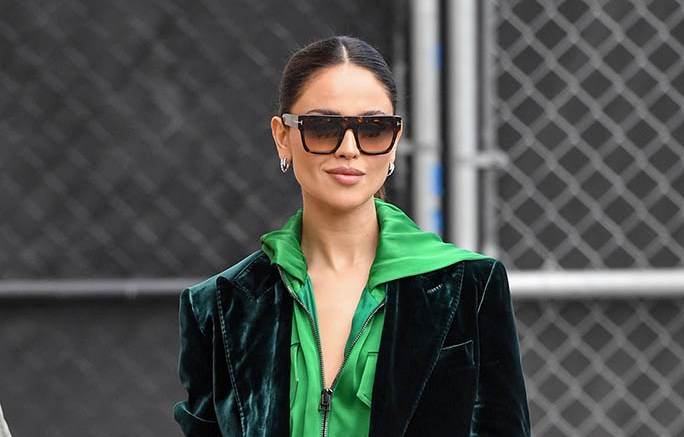 Eiza Gonzalez has been on a fashion roll while promoting her new movie “Ambulance.”

On Monday, the Mexican actress stopped by “Jimmy Kimmel Live!” to chat about her role as a paramedic and even joked about scaring her housekeeper with fake body pieces and getting an accidental voice note from “Ambulance” director, Michael Bay.

The film, which hits theaters on April 8, follows two robbers who steal an ambulance after their heist goes awry. Jake Gyllenhaal and Yahya Abdul-Mateen also star in the upcoming action thriller.

Gonzalez arrived at the late-night talk show in a velvet forest green power suit. The “From Dusk Till Dawn” alum put her own twist on a classic suit by pairing the outfit with a bright green satin hoodie. She accessorized with small silver hoop earrings and square ombré-tinted frames. The entertainer rounded things out with textured green heels that matched her top perfectly.

Gonzalez is known for having a classy and trendy fashion aesthetic on and off the red carpet. She proved this theory at the Los Angeles premiere of “Ambulance” on Monday night. The movie star exuded elegance as she arrived at the Academy Museum of Motion Pictures in an asymmetrical gown from Fendi’s Spring 2022 collection. The flowy frock had a draped sheer shoulder that cascaded over a sparkly cutout tube top. The dress also had a risky thigh-high side slit.

The brunette beauty topped her look off with Bulgari jewels including, diamond stud earrings and silver chainlink choker necklace. She swapped her blond hair for her signature brunette tresses, which she styled in a low ponytail.

Unfortunately, her outfit didn’t allow for a peak at her footwear choice, but it would be no surprise if she finished things off with towering heels, lace up sandals or a block heel silhouette.