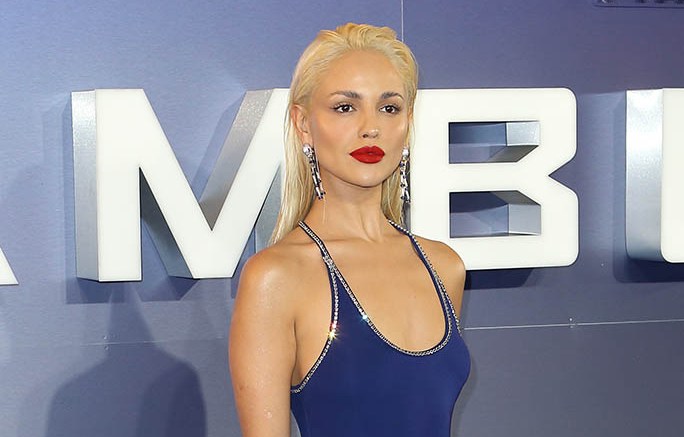 Eiza Gonzalez brought the glitz and glam to the London premiere of her new film “Ambulance” on Wednesday. The movie, which hits theaters on April 8, follows two robbers who steal an ambulance after their heist goes awry. Jake Gyllenhaal and Yahya Abdul-Mateen II also star in the thriller directed by Michael Bay.

Gonzalez made a bold statement at the special screening when the Mexican actress stepped out in a dark blue gown. The floor-length frock included a plunging scoop neckline and was adorned with jewels along the neck and on the hem.

While her dress was enough to captivate the audience it was really her hair that stole the show. Gonzalez swapped her dark brunette tresses for a bright blond head of hair. She swept the newly-dyed locs back behind her ears. The “From Dusk Till Dawn” alum continued to amp up her look with a bold red lip and diamond chandelier earrings.

The length of her dress made it hard to get a glimpse at her footwear choice, but it would be no surprise if she rounded things out with towering heels, a lace up silhouette or strappy sandals.

When it comes to fashion, Gonzalez is known for having a classy and trendy sartorial sense on and off the red carpet. She has worn gowns from Stella McCartney, Versace and Paco Rabanne. For footwear, she tends to gravitate towards styles from brands like Bottega Veneta, Malone Souliers, New Balance and Dr. Martens.

Earlier this week, she made quite the statement at the Paris premiere of “Ambulance.” Gonzalez donned a pink gown from Stella McCartney. The silk dress featured a one-shoulder design with a sparkly crystal piece at the shoulder. To add a boost of height to her ensemble, she slipped into a pair of platform sandals. The shoes were done in a shimmery pink colorway and included a thick platform sole, adding at least an inch to the overall height of the heels.