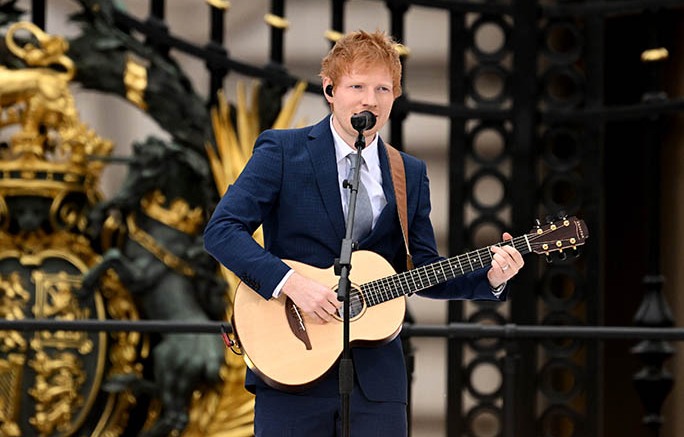 View Gallery 42 Images
Ed Sheeran performed for thousands of fans in front of Buckingham Palace to mark the end of the four-day Platinum Jubilee celebrations to honor Queen Elizabeth II on Sunday.
The 31-year-old musician sang his chart-topping hit “Perfect” as well as a special rendition of “God Save The Queen,” where her majesty made her return to the balcony. This was the first time that Queen Elizabeth II had made an appearance since Thursday’s lighting of the Jubilee beacon.

Sheeran hit the stage with his guitar in hand. He wore a navy blue suit, that was complemented with a white button-down shirt and grey tie. When it came down to footwear, the Grammy Award-winning singer put a daring spin on his formal attire with a pair of Air Jordan 4 sneakers.

The sleek shoe style featured the UK flag on the tongue and a chunky outsole. Sneakers with suits use to be a fashion faux-pas, now they are a strong sartorial move. The classic combination has moved from being associated with office wear to an insouciant expression of style. The right pair of sneakers can easily elevate any suit.

Click through the gallery to see the looks thus far from the Platinum Jubilee Party At The Palace.