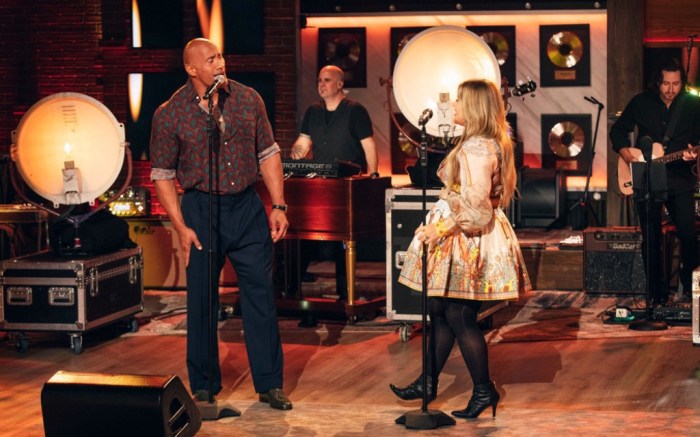 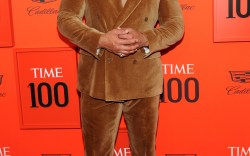 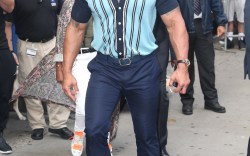 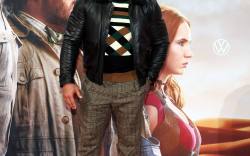 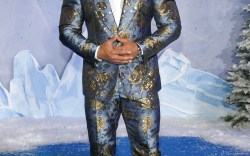 Dwayne “The Rock” Johnson surprised fans with his twangy country crooning on “The Kelly Clarkson Show.”

The Rock hit Kelly Clarkson’s eponymous talk show on NBC to talk about his upcoming movie, “Black Adam,” living in Nashville as a teen, introducing his daughters to Samoan culture and more. During the episode, which aired on Monday, Clarkson treated her guests to another installment of her Kellyoke bit. However, the real surprise came when Johnson joined Clarkson in a country duet.

The two sang Loretta Lynn’s “Don’t Come Home A Drinkin” as a tribute to the late country singer, who passed earlier in October.

While on the show, Johnson wore a red shirt with blue and white paisley print from Polo Ralph Lauren, paired with navy blue trousers. He added a chain necklace and a watch with a black leather strap.

For shoes, Johnson slipped into a pair of leather loafers. He tends to wear styles from Mark Chris, one of his favorite shoe brands. Often made of leather, loafers are slip-on shoes worn by all genders. They were first popularized in the 1950s amongst men, yet evolved over time into many styles and silhouettes. For men, loafers tend to be business-casual shoes; for women, they can also be lug-sole shoes synonymous with schoolgirl style.

The actor was styled by Ilaria Urbinati, who has also worked with Donald Glover.

Clarkson wore a colorful long-sleeved dress with a beige belt to cinch in at the waist. She added earrings and rings for her accessories, and she also added a pair of opaque black tights and black leather-heeled booties to complete her outfit.

Later during his interview, Johnson spoke about his appreciation for Lynn’s music. “I love Loretta Lynn,” said the actor. “I loved her growing up, and I grew up on country music — traditional country music, like, three chords and the truth, twin fiddle, steel guitar kind of country music.”

PHOTOS: Click here to see more of “The Rock’s” style transformation through the years.