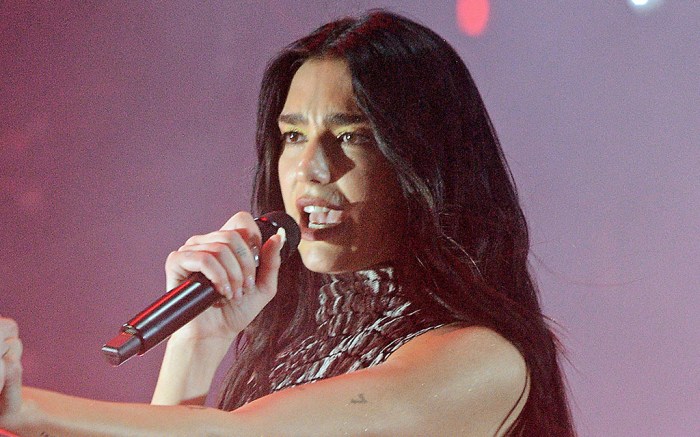 Dua Lipa played the Sziget Festival 2022 in Hungary in a reptilian look that certainly turned heads.

The performance took place on Wednesday, which was on day one of the festival. The “Levitating” singer captured the crowd’s attention with an Alaia bodysuit.

For the Lip’s look, the body suit featured a scaly snake like pattern in grey with a high neckline and no sleeves. The bodysuit was layered over black fishnets that gave the ensemble a grungy twist that was a departure from Lipa’s rather feminine street style aesthetic. Lipa wore little to no accessories, save for lock-shaped drop earrings by Eera that were barely visible behind her hair.

A lengthy performance called for some sturdy footwear. Lipa went back to basics and wore reliable black ankle boots for her onstage appearance.

Ankle boots are extremely versatile shoes that can feature a variety of heel styles. Boots that stop at the ankle can be practical, dressy, casual, minimal, showy and more. The style Lipa wore was perfect for standing and dancing for long periods of time because of the thick, sturdy heel and the forgiving curvature of the arch. The boots were made of a sleek black fabric with a slight reflective quality to them that made them perfect for the stage.

The Sziget Festival is one of the largest music and cultural festivals in Europe. It is held every August in northern Budapest, Hungary, on Óbudai-sziget, a leafy 108-hectare island on the Danube. The festival will be held from Aug. 10 to Aug. 15 and has hosted some of the worlds greatest musicians to date.

Step into sleek black boots and elevate your outfits.