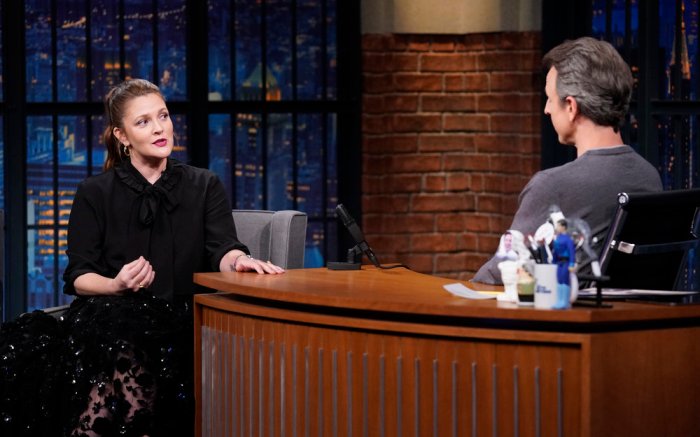 Drew Barrymore may be a stellar talk show host — just take her six 2022 Daytime Emmy nominations as proof — but she recently was on the other side of the talk show experience during a May 24 appearance on “Late Night With Seth Meyers.” For her guest spot on the show, the 47-year-old actress went gothic-chic with an all-black outfit and some seriously intimidating platform sandals.

For her late night appearance, Barrymore wore a black pussycat bow blouse with a slightly ruffled collar and gold buttons paired with a Michael Kors Collection black tulle skirt decorated with black sequin florals. The star wore the blouse rolled up to the elbows, with her matching skirt just skimming her ankles. The skirt’s hemline let Barrymore’s statement black platform sandals shine, with the chunky shoes featuring a delicate knot detail across the toes and a tie ankle strap.

Barrymore wore her wavy locks pulled back into a high ponytail, helping to show off a pair of mid-size gold hoop earrings. The star also accessorized with two statement rings, a gold watch, and a colorful DIY beaded bracelet with “BFF” spelled out in letter beads. For makeup, the Flower Beauty founder wore a simple, understated glam that was amped up with a bold berry lip.

On the show, Barrymore discussed having to cancel an earlier appearance due to a bad run of bronchitis, which Meyers proved by playing a hilarious clip of her personally calling out on the day of the show. Meyers also showed a clip of a young Drew on “The Tonight Show Starring Johnny Carson” and chatted with the actress about a crabbing trip gone wrong in New York City.

Elevate your style with these black platform Mary Janes.