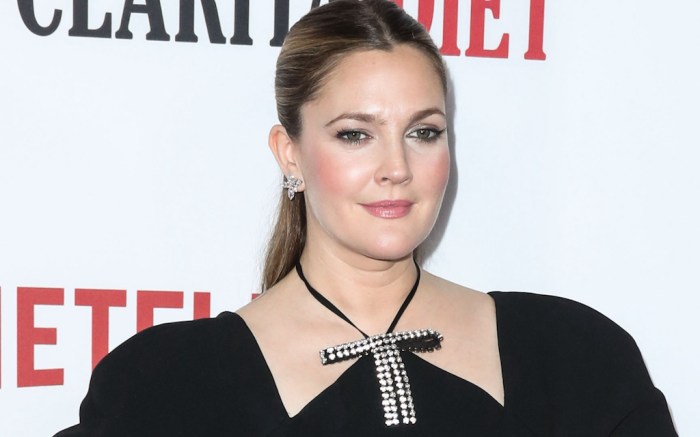 Drew Barrymore looks cheery in her birthday ensemble for The Drew Barrymore Show. The “Scream” star taped an episode of her eponymous show today that featured a guest appearance from Tori Kelly, who sang happy birthday to the actress.

When it comes to the outfit, Barrymore opted for a red and pink printed blouse that had flowy sleeves paired with a black vest for a stylish ‘70s-inspired moment. On the lower half, she opted for a pair of flared, loose-fitting black trousers that rounded out her attire while also playing into her vintage feel.

Although Barrymore’s shoes were mostly covered by her pants, when she moved, a glimpse of her black platform pumps showed, which grounded her ensemble perfectly.

Barrymore typically opts for clothing that takes a nod at vintage styles and also encompasses some form of modernity. For example, we have seen Barrymore wear a red silk suit and hidden heels at Christian Siriano’s New York Fashion Week show this year. And we’ve even seen her don a black blouse and coat paired with a sparkly skirt and plain black booties for a chic look during the 2021 Jingle Ball. On the footwear front, Barrymore tends to wear platforms, pumps and sneakers that align with her distinct fun tastes.

When not recording, Barrymore walks down red carpets in gowns from brands like Versace and Carolina Herrera. The “50 First Dates” actress has also created campaigns for notable brands like Guess, Miu Miu and Missoni.