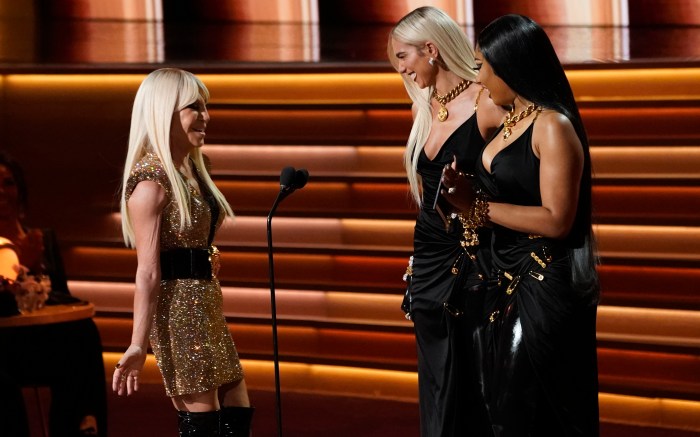 Donatella Versace proved that what a bold fashion moment needs is a change of a dress — or two, in this case — with Dua Lipa and Megan Thee Stallion at the 2022 Grammy Awards on Sunday.

While Lipa and Megan presented the Best New Artist award during the Las Vegas ceremony, the pair arrived onstage in Versace’s safety-pinned dresses and gold jewelry — respectively wearing platform boots and chain-accented sandals. However, their outfits were so similar that the rapper accused Lipa of “stealing my look.” The pop singer humorously retorted: “I was told I had the exclusive. I’m going to have to talk with Donatella.”

In a moment of pure camp, Versace herself broke up the squabble in a gold minidress and her iconic platform boots. The fashion designer quickly removed Lipa’s skirt to reveal black leather leggings — as well as Megan’s, revealing an asymmetric dress over the same leggings. The pair’s new ensembles still proved the power of a coordinating moment while remaining utterly sleek.

“Now, these are my girls,” Versace proclaimed before stepping offstage, allowing them to present Best New Artist to Olivia Rodrigo.
The moment paid homage to one of music’s most iconic onstage diva moments, hailing from a humorous 1998 stint. At the time, Mariah Carey and Whitney Houston arrived onstage at the MTV VMAs in the same plunging brown Vera Wang dress. In a clever stint, Carey removed her skirt to reveal an asymmetric high-low dress — while Houston did the same, revealing a similar silhouette with a knee-length skirt. However, the duo embraced at the end — proving, as Megan and Dua did 24 years later, that there’s no room for bad blood where fashion is concerned.
The 2022 Grammy Awards air tonight at 8 p.m. ET on CBS, honoring excellence and outstanding achievement in the music industry for the year. Hosted by “The Daily Show’s” Trevor Noah, the show takes place in Las Vegas at the MGM Grand Garden Arena. Up for top awards this year are singer-songwriter Jon Batiste, who leads the Grammy nominations with 11 nods; Doja Cat, H.E.R. and Justin Bieber not far behind with eight nominations each. Performers include J Balvin, John Legend, Carrie Underwood and more.