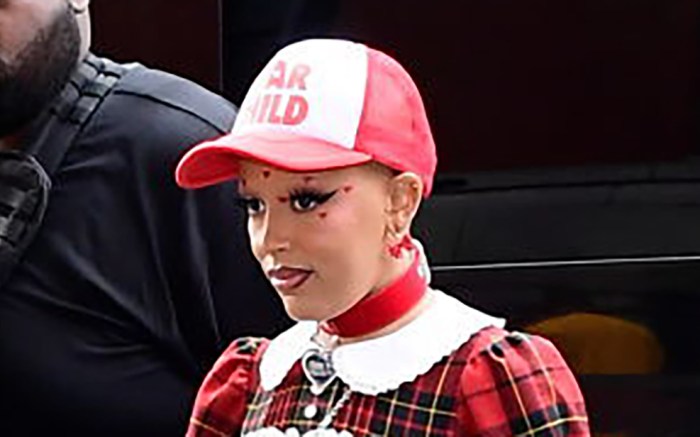 Doja Cat is ready for Halloween. The “Streets” songstress recently took to Instagram wearing a Halloween-inspired style, showcasing that she’s ringing in the spooky season.

In the post, Doja Cat snaps a mirror selfie wearing an orange crisscross strapped bikini top with two pumpkin faces across its body and black leather pants with crystal-embellished details. “HAPPY WHAT??!?????” she captioned the post, followed by a series of talking head and pumpkin emojis. The day before, she shared a mirror selfie in a nurse costume that featured a lace-top, black and red skirt, red stockings, and headband, coupled with a silver necklace set.

Earlier this month, the “Vegas” artist, who has continued to showcase her eclectic style, made headlines during New York Fashion Week, premiering a range of striking looks as she arrived at each event.

Brett Alan Nelson styled her look and has worked with Lizzo, Karol G, Grimes, and Bebe Rexha. Nelson has styled Doja numerous times, including her appearances at New York Fashion Week, the 2022 Billboard Music Awards, March’s Billboard Women in Music Awards, the 2022 Grammys, the music video for her soundtrack single “Vegas” from the Baz Luhrmann-directed “Elvis” biopic film, her festival performances, Planet Her album artwork and much more.