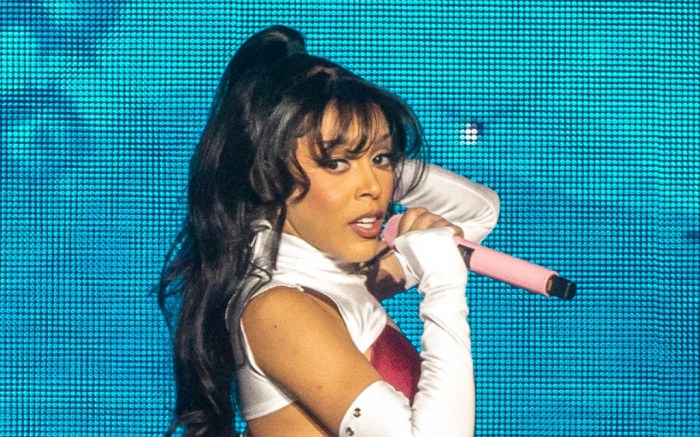 The “Say So” singer took to the stage at the 2022 College Football Playoff Concert Series on Saturday in Indianapolis. She wore a pair of white bike shorts underneath red and black chaps with white fringe along the sides. She added a black and red bikini top to the ensemble as well as fingerless gloves.

The “Planet Her” artist added a pair of trendy boots to her performance look that were reminiscent of a pair she wore performing last October. She slipped into a pair of white lug sole boots that peeked out from underneath her chaps. Lug-sole boots were a top footwear trend in 2021, due to their thickness and comfort that brings most looks a combat-ready appearance, and don’t seem to be going anywhere. In addition to Doja Cat, Kourtney Kardashian, Hailey Baldwin and Kate Hudson have also worn lug-sole pairs by Prada, Bottega Veneta and Stuart Weitzman throughout 2021.

The 26-year-old musician favors the bold for red carpet occasions and on-stage performances, modeling everything from sheer Givenchy gowns to pointy Bottega Veneta heels and custom Georges Hobeika designs. She often coordinates her footwear with her avant-garde outfits, wearing platform sandals by Christian Louboutin, Le Silla, D’Accori and other top brands on the red carpet.

Her off-duty attire includes just as wow-worthy of pieces as well, with styles like Philipp Plein thigh-high boots and Fashion Nova leopard bodysuits in rotation. Just in the past few months, the “Streets” musician partnered with PrettyLittleThing to launch her own collection of must-have styles.

Click through the gallery for more of Doja Cat’s daring looks over the years.

Add a touch of combat into your closet with white lug sole boots.