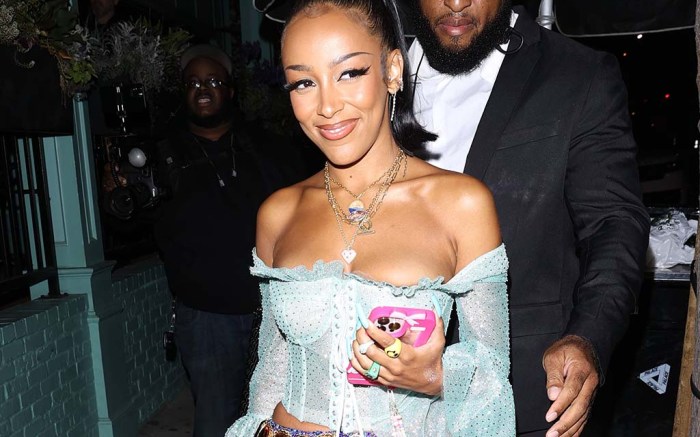 Doja Cat had a night on the town in Los Angeles on Thursday night for Elle‘s Women in Music event. The mag’s June cover star was celebrated by Dolce & Gabbana during an intimate dinner at Olivetta in West Hollywood. Other guests included Heidi Klum, Normani and director Baz Luhrmann.

For the occasion, Doja Cat pulled out all the stops, wearing nearly $10,000 Dolce & Gabbana boots. The embroidered lurex jacquard boots currently retail for $9,345 and are covered in colorful gemstones and crystal embellishments.

Featuring a pointed toe, the purple knee-high boots are made in Italy and offer a 4-inch stiletto heel.

To complete the look, she coordinated the party-ready shoes with a jacquard miniskirt, which was also included a gemstone belt, along with a puffed sleeve, corset top. The “Get Into It” singer’s baby blue nails matched her shirt, too.

In Elle‘s cover story featuring Doja, the star said she’s extremely interested in hitting the big screen for her acting debut. Most recently, however, she hit Hollywood via the soundtrack for Luhrmann’s “Elvis” film, covering the original Big Mama Thornton version of “Hound Dog.” The song has since taken over TikTok.

ICYMI: @dojacat’s Official Video for “VEGAS” with #ShonkaDukureh is out NOW. Featured on the official soundtrack of @bazluhrmann’s ElvisMovie, experience it in theaters June 24. ⚡️ #TCB