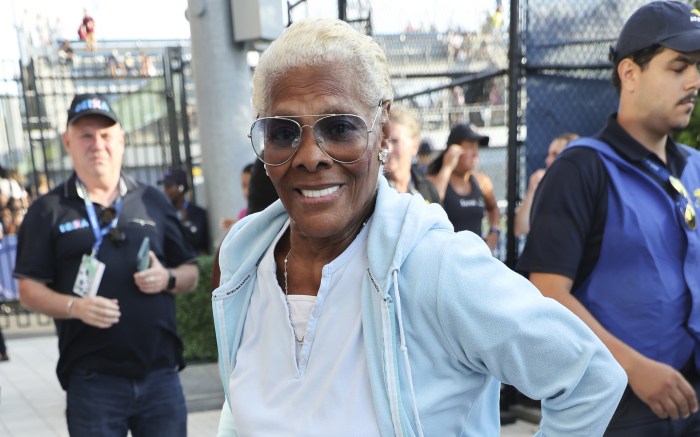 Another celebrity was seen at the USTA Billie Jean King National Tennis Center in Queens, New York City to support Serena Williams in her final Grand Slam run in the 2022 U.S. Open.

In a baby blue layered look, Dionne Warwick attended the opening round of the tournament this Wednesday to watch Williams’s second round match. She wore a hoodie on top of a light blue button down and a white T-shirt, showing that she was prepared in extra layers for the changing of the seasons. Her blue pants matched that of her zip-up hoodie, and the lighter shade underneath added contrast.

Her white clogs nodded to the white peek of T-shirt, a chunky footwear selection that gave dimension to the outfit and added comfort to the look.

The subtle hints of jewelry didn’t overpower her look. The singer’s fanny pack brought an edge to the outfit, a burnt leather belt bag that fastened around her waist. The embroidering of the belt bag gave it an elevated feel. Her circular-framed sunglasses align with the Top Gun Aviator trend that’s sweeping media, and it adds a youthful touch to the outfit.