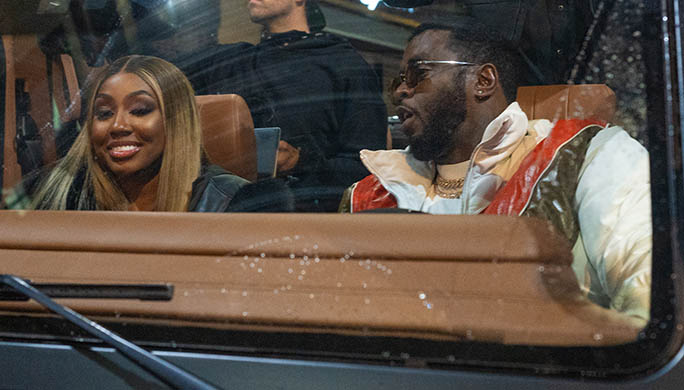 When Sean “Diddy” Combs throws a lavish party you can expect a slew of famous faces to show out for the event. That’s exactly what happened when the “Gotta Move On” rapper hosted a gathering in New York City on Tuesday night.

Diddy was dressed in cozy fall staples for the occasion. The legendary music mogul wore a cream puffer coat that featured orange and brown leather padding on the shoulder. The outerwear also had a wide puffy collar and fitted cuffs.

Diddy wore the jacket with a simple white T-shirt and denim jeans. To further elevate the moment, the world-renowned entrepreneur added dark round sunglasses, diamond earrings, and a blinged-out necklace. Unfortunately, his footwear was not visible but it would be no surprise if he completed his look with statement sneakers or boots.

Yung Miami took a daring approach to monochromatic style for the celebration. The 28-year-old rapper and podcast host was dressed in all-black attire. Her ensemble consisted of a dramatic fuzzy coat and a mesh cutout jumpsuit. To amp up her look, she accessorized with fingerless crystal-embellished gloves and a leather handbag.

When it came down to the shoes, Miami tied her look together with a set of black pointed-toe pumps. The silhouette had a bejeweled embellishment on the pointed toe, feather details on the counter, and sat atop a thin stiletto heel.

Diddy is a pioneer in the hip hop community and an entrepreneur who has seen success in the fashion space. The “I’ll Be Missing You” hitmaker launched his own sportswear brand Sean John in the ’90s.