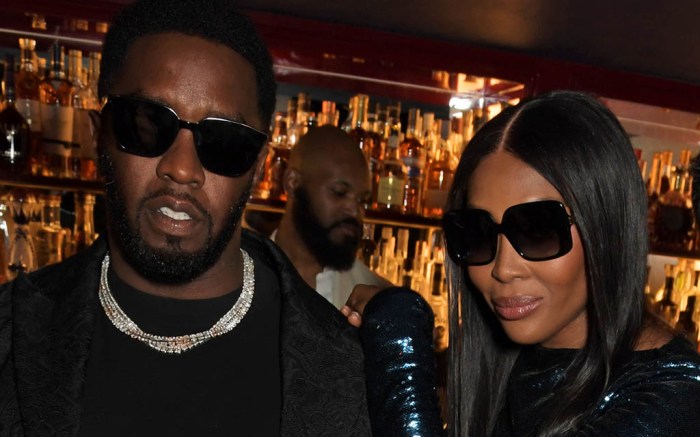 Sean “Diddy” Combs will always light up a room and step out in style. The legendary musician and world-renowned entrepreneur perfected the monochrome trend while arriving at the Twenty Two in London on Thursday night. City Girls Yung Miami as well as Diddy’s son, Justin Dior Combs and Winnie Harlow also popped out for the festivities.

Diddy touched down in the city to promote his new track, “Gotta Move On” which features Bryson Tiller and to attend a private party for his longtime friend Naomi Campbell. The iconic supermodel received an honorary doctorate degree from the University for the Creative Arts in London for her decades of work in the global fashion industry.

Diddy stepped out in an all-black ensemble by Saint Laurent. His outfit consisted of a kimono jacket that had an oversized fit with embroidered detailing throughout, wide lapels and a tailored hem. The record executive completed his look with a black T-shirt from Fear of God and pants. Sticking to his signature style sense, Diddy took things up a notch with sleek shades and a diamond chain.

He completed his look with shiny black loafers. Often made of leather, loafers are slip-on shoes worn by all genders. Loafers were first popularized in the 1950s amongst men, yet evolved over time into many styles and silhouettes. For men, loafers tend to be business-casual shoes; for women, they can also be lug-sole shoes synonymous with schoolgirl style.

Brother Love is a pioneer in the Hip Hop community. His work ethic is exemplified in the empires he’s build in both music and fashion. Simply put, he’s been inspiring us all since the early 90’s. Another thing that cannot be understated is the many fashionable moments he’s had throughout his career. The “I’ll Be Missing You” hitmaker has even launched his own luxury-sportswear brand Sean John, which has changed the face of fashion.