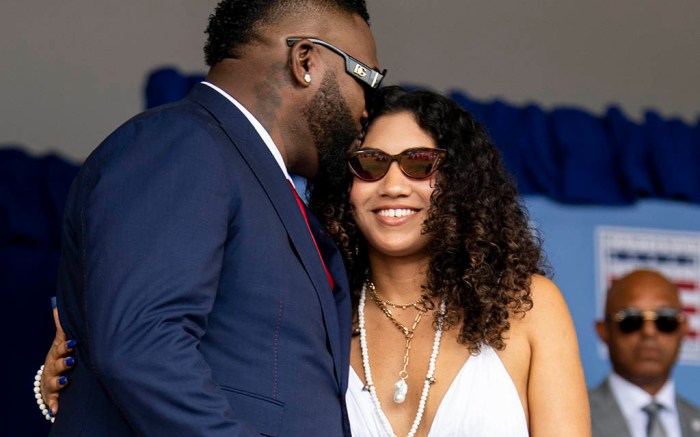 David Ortiz was inducted into the National Baseball Hall Of Fame on July 24, a career pinnacle for any professional athlete. To make the day even more special, the retired slugger’s 21-year-old daughter played a key role in his ceremony. Alex Veda Ortiz sang the National Anthem at her famous father’s Hall of Fame ceremony, dressing in pure white summer style for the occasion.

The 21-year-old is about to enter her senior year at the famed Berklee College of Music in Boston, making her a top choice for the gig.

She accessorized the look with a long white beaded necklace layered with a gold chain necklace, a white beaded bracelet and gold chandelier earrings. Veda Ortiz also wore a pair of tortoiseshell sunglasses with the look.

The Skechers campaign star’s daughter wore her curly hair natural. Her long royal blue acrylic nails were on display as she gripped the microphone, adding a pop of color to her look.

David Ortiz was a major league baseball player from 1997 to 2016, most noted for his time with the Boston Red Sox from 2003 to 2016. He started out his career with the Minnesota Twins. During his MLB tenure, Ortiz was a top-ranking first baseman and designated hitter noted for his ability to hit home runs. In his final MLB season, Ortiz hit 38 home runs, the most ever hit by a player in his final season.