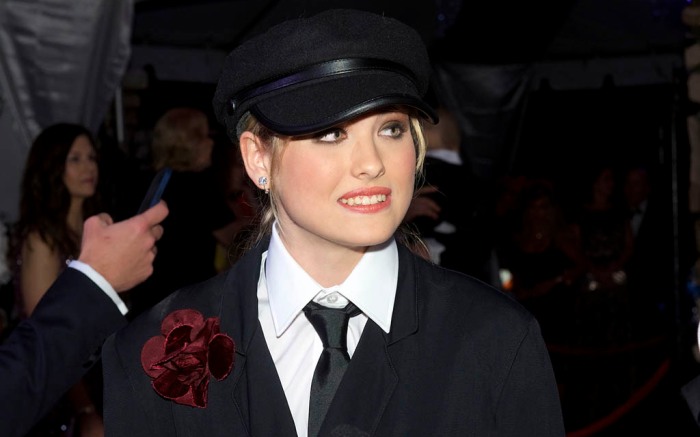 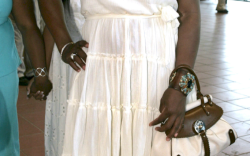 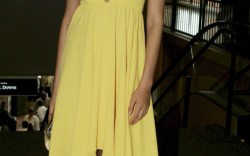 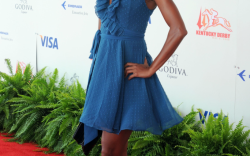 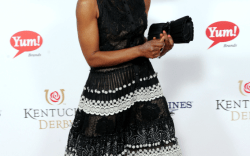 Dannielynn Birkhead is noted for her Kentucky Derby style, attending the event every year with her adoring father Larry Birkhead. For the 2022 event, the 15-year-old daughter of the late Anna Nicole Smith wore a vibrant dress crafted out of a loud ’60s-inspired fabric, daisy platform jelly heels and a bold baby blue hat. Needless to say, the end result was perfect for the iconic racing event at Churchill Downs.

In an Instagram shot of the duo posted by her father today, Dannielynn wore a colorful knee-length dress by Spanish designer Celia B. The puff-sleeved dress was made of a retro cartoon print featuring clouds, flowers and suns. Other features of the dress included a V-neckline, a bow at the waist, a flouncy skirt and a cute scalloped hem.

To match the look, Dannielynn wore floral platform jelly sandals by Betsey Johnson, which featured four jelly daisies in various colors across the toe strap. Set on a 3.5-inch block heel, the “Beckket” sandal retails for $70 on Nordstromrack.com.

To top off her Derby attire, the teen wore a giant baby blue flower hat with blue and yellow feather accents, a Kentucky Derby necessity. Dannielynn accessorized the look with some candy-colored beaded bracelets and a simple blue gem necklace.

The night before the Kentucky Derby, the pair attended the Barnstable-Brown Gala, an annual exclusive Kentucky Derby Eve party. The pair met Janet Jackson at the May 6 event, posing for a picture with the music icon. Notably, Dannielynn was wearing the exact outfit Jackson wore to the 2003 Barnstable-Brown Gala. The almost 20-year-old outfit, which was recently bought as part of a charity auction, featured a black jacket and trousers with a black tie and white shirt. The statement feature of the look, however, is a leather corset-like belt wrapped at the waist, which features delicate cutouts. Dannielynn also wore the same hat Jackson wore with the outfit back in 2003.

Jackson was pictured with the Birkheads wearing a simple black turtleneck sweater with large gold hoops, her hair piled on top of her head in a statement bun. Jackson paired the sweater with black trousers for the event, which she tucked into black combat boots. Layered on top of the look, the 55-year-old star wore a black textured trench blazer with a leather lapel, decorating her wrists with several chunky back bracelets.

Serendipitously, Larry and Dannielynn had already planned to attend Jackson’s concert after the Kentucky Derby festivities on May 7 before meeting the music icon the day before. Looks like they now have an in with Ms. Jackson.