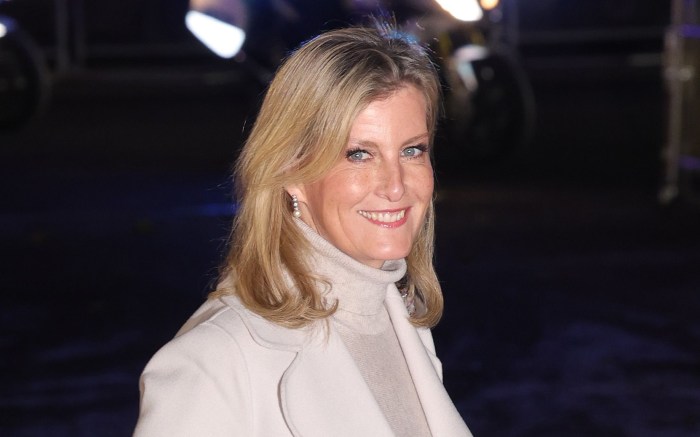 Prince Edward’s wife Sophie, Countess of Wessex, joined the royal family at the “Together at Christmas” carol service in London on Dec. 15. The event, held at Westminster Abbey in London, is a holiday special hosted by Kate Middleton, Princess of Wales, and attended by royal members including Prince William, Camilla, Queen Consort and King Charles III.

For the occasion, Sophie layered up in a cream-colored Reiss turtleneck midi dress, which she cinched with a camel brown colored belt and paired with a matching Max Mara floor-length wool coat.

The countess accessorized with a pair of pearl dangle earrings and a silver-toned ring. She added some texture to the look with a python leather clutch.

To bring in the warm clothes from her purse and belt, Sophie completed the look with a pair of camel brown Reiss boots. The calf-high heels featured a fitted sleeve that was fastened with a zipper closure. The pointed-toe boots brought height to the look with a stiletto heel that was about 3 inches tall.

The wife of Prince Edward is known for her classically chic style. Her closet is filled with polished mules, wedges, and pointed-toe pumps similar to the ones she paired this look with. Sophia often wears sleek styles from designer labels like Jimmy Choo, Manolo Blahnik and Gianvito Rossi.