Ciara Rips and Runs in Russell Wilson’s Jersey, Stretch Pants and Combat Boots With Their Kids on the Football Field 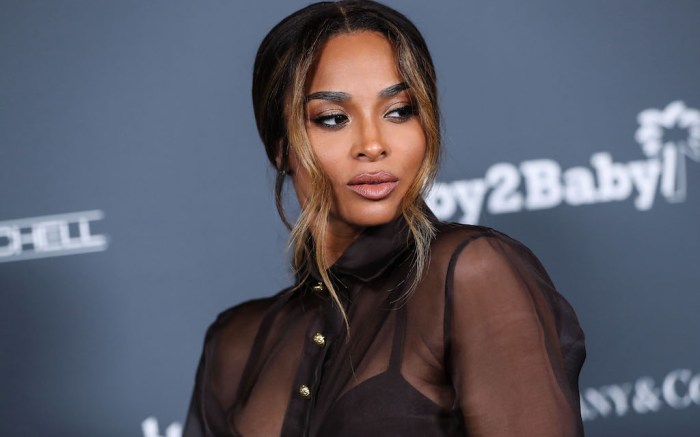 Ciara shows off her football skills by out racing her kids in her latest post.

The “Body Party” singer shared a slew of videos and photos on Instagram yesterday that showed the musician playing football with her family, including her husband, Seattle Seahawks quarterback Russell Wilson, and their daughter together Sienna. Also joining in was Ciara’s son Future, who shares the same name as his father from her previous relationship. For the outfit, Ciara donned a red, white and blue jersey that had the number three printed on the front and back (a nod to her husband’s NFL number) paired with black stretch pants for an athletic look. Under the jersey, she wore a black long-sleeve T-shirt with the sleeves pushed up. She accessorized with a pair of sleek sunglasses and several pieces of gold jewelry.

To complete everything, Ciara slipped on a pair of black chunky combat boots that came up to her calf.

Ciara has a trendy and edgy sartorial sense that she displays on both her Instagram feed and when she’s on duty. For example, she recently wore a threadbare halter dress that showed her affinity for intricate and flashy pieces. And we’ve even seen her wear effective activewear that places an emphasis on comfort and functionality.

The “1, 2 Step” singer has also created her own lane within the fashion industry. She has landed campaigns and partnership deals with Kohl’s, Nike and Roberto Cavalli. And currently, she and her husband collaborated on their venture named The House of LR &C, which strives to provide products from brands that embody love, respect and care and give back to the world.

Put on a pair of chunky black boots for a rugged appearance.