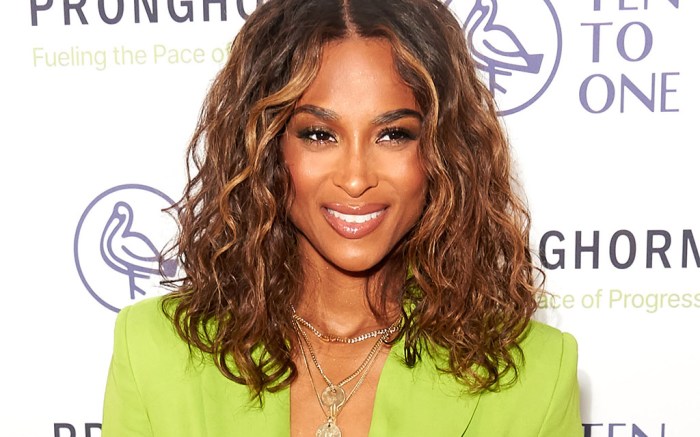 Ciara took to Instagram to celebrate the release of her next song, “Better Thangs,” which features Summer Walker. “Top 10 on iTunes overall! Day 1! Aye! It’s a celebration #BetterThangs #Release Day,” she wrote.

In her post, Ciara shared a series of photos of herself wearing a silver metallic jumpsuit that has emphasized shoulder pads. Ciara opted for a layered jewelry look in all gold, with various bangle bracelets on both of her wrists, and three gold chain necklaces including one with her name written on it. She also added several chunky rings to her look, as well as large hoop earrings, also in gold.

When it came down to footwear, Ciara wore a pair of platform boots with a square toe and square block heels to elevate her look. Although the singer’s jumpsuit made it almost impossible to take a peek at her shoes, because of its length.

For makeup, she had a silver metallic gloss eyeshadow on her lids to match her jumpsuit and her lips had a glossy natural plump.

To promote the upcoming release of her song with Walker, Ciara has posted several times to her grid giving fans a sneak peek of what appears to be the cover image of the single as well as imagery from the music video for the song, “Better Thangs.” The video premiere of the music video is set to be released this Friday.

Ciara oftentimes posts on Instagram, recently she has been sharing her support for her husband, Russell Wilson and his football career with the Broncos through dancing on the field. Earlier this week, she celebrated Wilson’s win dancing on the sidelines.