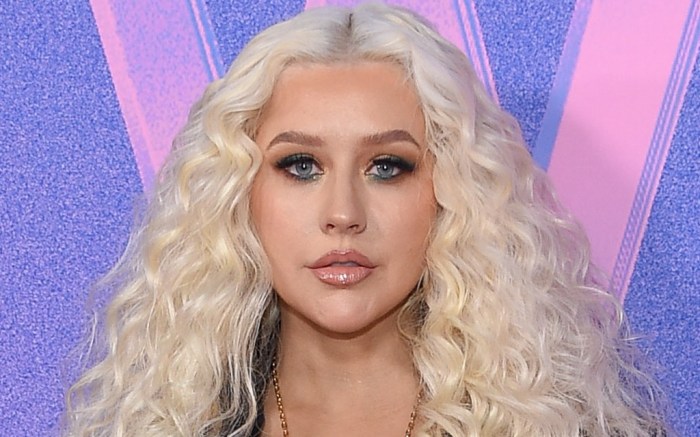 Pop music icon Christina Aguilera just released a long-awaited music video for her song “La Reina,” which celebrates the singer’s Latina roots in a simple yet gorgeous style. For the video, Aguilera wears a crimson red dress that has her channeling the title of her song, which translates to “The Queen.” Simply put, Aguilera looks like full-on royalty.

For the performance-based music video, the 41-year-old star sings with a mariachi band while wearing a gorgeous red Garo Sparo corset gown, which features a longline V-neck boned bodice extending down her hips. The bodice, which laces beautifully up the back, features elegant sleeves that drape off the shoulders, one of which is slightly longer than the other, creating asymmetry.

The regal gown’s elegant skirt starts at the low hips, spilling into a floor-sweeping style with a cascading off-center slit and a sizable train. Aguilera’s gown features a large red rose detail at one of the hips, adding even more royal flare.

To accent the dress, Aguilera wore her ginger hair down her back, with the pop star pulling the front portion of her hair into a braided crown at the top of her head. Aguilera wore a minimal glam makeup look in the music video, which was focused around a rosy carved eye look and a nude lip. She appeared to wear no jewelry, save for tiny gold hoop earrings that hugged her lobes.

“La Reina” is just one song off of the singer’s six-track EP “La Fuerza,” which was released in January 2022. The album marks Aguilera’s first Spanish-language release in 20 years, according to Billboard.

See more of Aguilera’s style through the years.