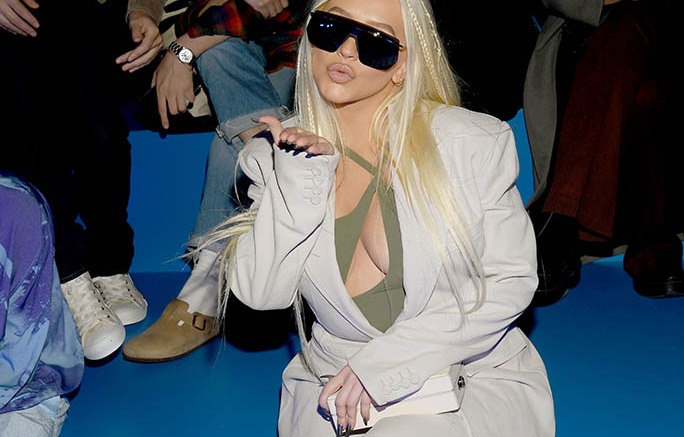 Christina Aguilera showed up in style at the Dior Men’s Spring 2023 collection show in Venice, Calif.., on Thursday. The pop superstar attended the high fashion affair with her fiancé Matthew Rutler. Xtina posed on the blue carpet in a neutral-colored power suit, which featured an oversized blazer and matching baggy high-waist pants.

To add an eye-catching element to her look, the “Genie in a Bottle” hitmaker wore an olive green cutout top underneath her suit jacket. The garment had a crisscross halter neckline and a plunging asymmetrical cutout at the center.

Xtina added a slick edge to her ensemble with oversized sunglasses and a small square clutch. She styled her signature platinum tresses straight and stayed true to her personal aesthetic by complementing her outfit with long chrome nails. Her fiancé Matthew Rutler stuck to a cool vibe for the outing, pairing a brown suede jacket with a basic T-shirt, black pants and white sneakers.

Aguilera finished off her look with a white pointy silhouette. When it comes to footwear, the Grammy Award-winning singer takes her outfits above and beyond the expected with thigh-high boots, strappy sandals and chunky sneakers by Yeezy, Nike, and Gina Shoes.

The Dior Men’s Spring 2023 fashion show brought out some of the biggest names in Hollywood. Set against an impressive ocean-themed runway, just a few blocks away on Pacific Avenue in Venice Beach, the new capsule collection pays homage to the Californian atmosphere with the skateboarders. The iconic creations of the House are reinterpreted by highlighting the meeting between guest designer Eli Russel Linnetz of ERL and Kim Jones—who is now in his fifth year with the fashion house. The high fashion affair featured a star-studded guest list including Michael B. Jordan, Christina Aguilera, Jaden Smith, Paula Abdul, Rita Ora, Kelly Osbourne, Kid Cudi, Cordae, Tony Hawk, Nicola and Brooklyn Peltz Beckham, Winnie Harlow, Kimora Lee Simons and so many more.

Flip through the gallery to see more of Christina Aguilera’s boldest looks over the years.