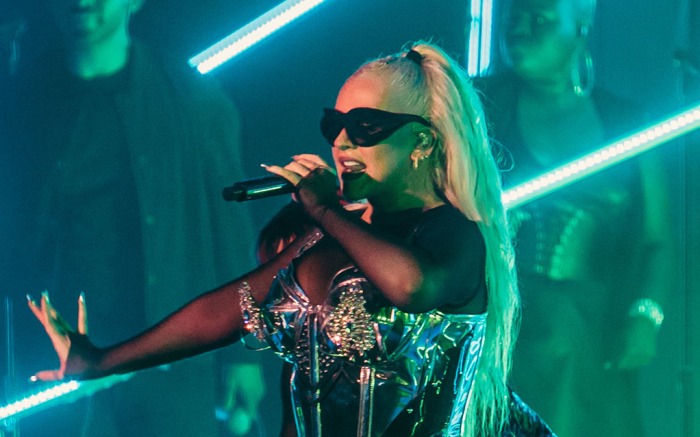 The “Lady Marmalade” songstress owned the stage in Marbella for the Starlite Festival on July 25, hyping up the crowd with her intense stage presence and costuming. Aguilera is gearing up for a brief tour starting at the end of July to the beginning of August, her musical ventures taking her to the United Kingdom and Monaco.

The singer donned a metallic armored bodysuit for her performance, the outfit expressive and shiny, especially under the bright stage lights. The suit was strappy with a fitted and sculpted bodice, parts of the bodice sticking out for a more dramatic effect.

The bodysuit was fitted with hip pads that jutted out to widen Aguilera’s stance, giving her that robotic quality that the piece was made to convey. The singer wore a black mesh long sleeve shirt under the silver ensemble for extra coverage, mirroring the style on her legs with fishnets in black. Aguilera wore vinyl black chaps with a bell bottom hem, the sudo pants adding another interesting textural element to the outfit.

Aguilera’s costuming was meant to be eye-catching, pushing the singer to try out new silhouettes for explorative purposes. The futuristic silver suit was definitely out of the ordinary despite Aguilera’s affinity for exceptionally intricate clothing items.

When it came time to deciding what kind of shoes should go with this head turning ensemble, only one shoe seemed to fit the bill. Once the sleek chaps were removed, the star unveiled thigh-high black boots that were just as shiny, if not more.

Aguilera fancies a pointed pump or boot, every shoe she wears fitted with an interesting silhouette or a point of interest. These thigh-highs are no exception, effectively raising the star to new heights while allowing her to perform comfortably.

Stomp through life in these slick thigh-high boots.

To Buy: Jessica Simpson Louxie Over the Knee Boot, $90