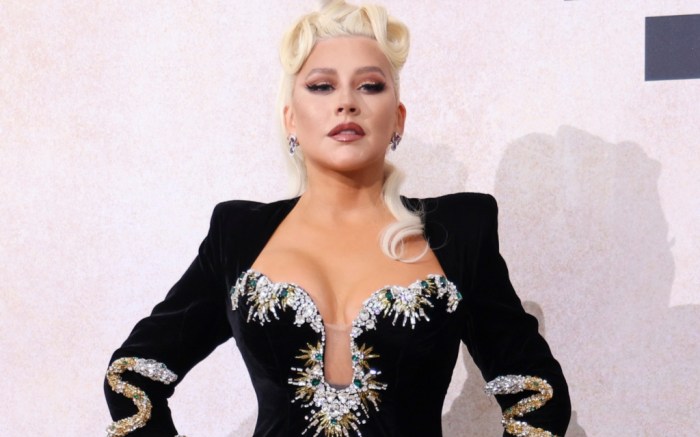 The “Dirrty” songstress was ready for a swim, posting a montage style video to her Instagram on Friday of her lounging in a deck chair basking in the sun. Each frame saw Aguilera showing off a different pose, giving her best smoldering model-like looks to the camera.

Fighting the heat, Aguilera dressed down in a white bikini top and bottom from Praying. The bikini top was a halter style with triangular cups with black writing on each cup.

The bottoms were the same stark white, also with that curly black writing. The words on the bikini read “Pere, Fils, Saint Esprit” which is in reference to the holy trinity. Overtop the bikini, Aguilera wore a breezy white button down with long sleeves and an oversized fit. Aguilera shielded her eyes from the sun with large black frameless sunglasses and wore her hair down and straight, letting her blond locks fall down her shoulders and back.

Although Aguilera isn’t wearing any shoes during her day at the pool, the singer has some obvious footwear favorites. The Grammy Award-winner often favors sky-high boots, sandals and pumps by Gianvito Rossi, Amina Muaddi and Balenciaga. The star can also frequently be seen in shoes by Christian Louboutin, which she collects in her boudoir-themed shoe closet as well.

The “Lady Marmalade” songstress owned the stage in Marbella for the Starlite Festival on July 25, hyping up the crowd with her intense stage presence and costuming. Aguilera geared up for a brief tour starting at the end of July to the beginning of August, her musical ventures taking her to the United Kingdom and Monaco. The singer seems to be relaxing off all the tour-stress, and doing so in style.

Click through the gallery to see Christina Aguilera’s boldest looks over the years.