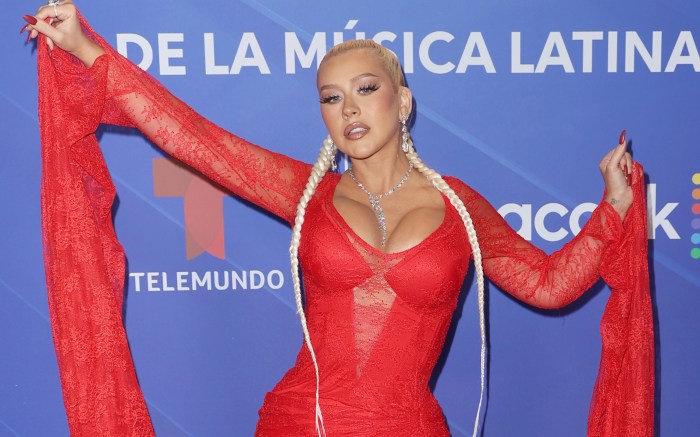 Christina Aguilera made a fiery statement at the 2022 Billboard Latin Music Awards on Sept. 30 from the Watsco Center in Coral Gables, Fla. The singer lit up the stage as she sang her song “La Reina” at the award show.

Aguilera wore a red laced corset dress with draping sleeves and ruched detailing. The songwriter’s scoop neck fitted gown was a custom Buerlangma with the matching corset made by Anthony Ladd Canney.

She paired the gown with pantaleggings boots with pointed toes and stiletto heels. She finished the look with a sparkling lariat necklace with a cross pendant and diamond dangle earrings from Gismondi 1754 Jewelry.

Aguilera was styled by Chris Horan for this fierce look. The stylist has also worked with Barbie Ferreira, Shania Twain, and Madison Beer.

The actress kept her platinum blonde hair in a sleek double braided style that cascaded down the front of her dress. Her minimal makeup featured a light eye look with a glossy nude lip. Her usual glam team makeup artist Etienne Ortega and hair stylist Iggy Rosales created this look. The duo have also worked on Kris Jenner, Demi Lovato, and Addison Rae.

Along with her standing ovation performance, Aguilera also received the Spirit of Hope Award for the philanthropy she is doing to support the Latin community. The singer was presented her award from Ozuna and Becky G.

The 29th annual Billboard Latin Music Awards was broadcasted live on the Spanish television channel Telemundo. This award show honors the most popular albums, songs, and performers in Latin Music as determined by Billboard‘s weekly charts. Other artists that received recognition last night were Bad Bunny, Nicky Jam, and Enrique Iglesias. The entertainment magazine is also hosting a Latin Music Week in the Miami area from Sept. 26 to Oct. 1 with performances from some of the nominees and winners.