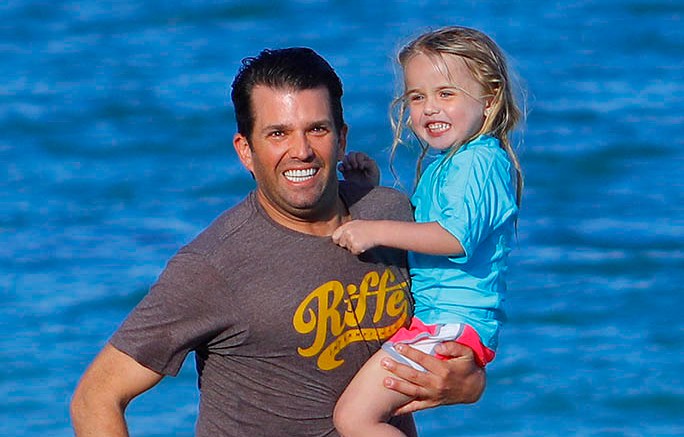 Chloe Trump was an adorable flower girl for her aunt Tiffany Trump’s wedding to Michael Boulos on Nov 12. The youngest child of Vanessa and Donald Trump Jr. joined her family at Mar-a-Lago in Palm Beach, Fla.

Donald Trump Jr. took to Instagram to upload a family photo of his five children at the celebration. Donald Trump III, Spencer Trump, Kai Trump, Tristan Trump and Chloe Trump all appeared in the photo.

“Great time with the Smurfs at Tiffany’s wedding yesterday. The little ones were all in it and were perfect… not that there was ever any doubt,” Donald captioned the photo along with a wink emoji.

Chloe posed for photos with her family in a baby blue dress. The top of the garment was decorated with floral designs and included a sheer, pleated skirt. The 8-year-old parted her hair in the middle and styled it straight.

Completed Chloe’s look was a set of sparkling silver ballet flats. The shoes had a round toe and a thick strap that ran across the instep.