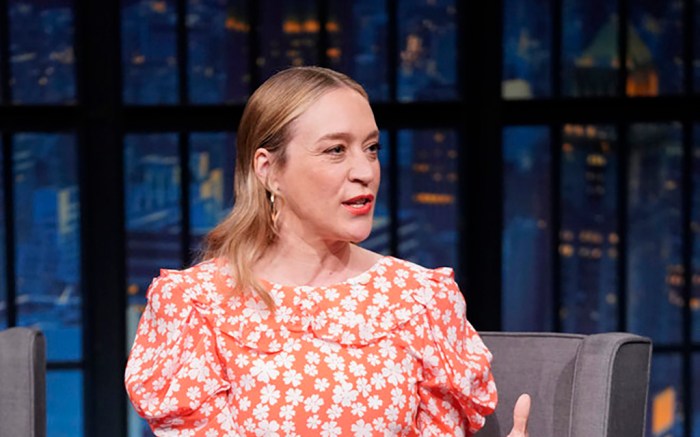 Chloë Sevigny isn’t one to shy away from a well-calculated style risk. Known for her quirky and experimental fashion, Sevigny recently applied that fearless style philosophy to her footwear for an appearance yesterday on “Late Night with Seth Meyers.”

The 47-year-old actress, who was on the show to promote some recently-released projects, wore a vivid coral-red summer dress with a white flower print for her appearance on the show. The dress featured an ankle-sweeping wrap skirt with an empire waist and voluminous sleeves that reached to Sevigny’s elbows. But that isn’t what will capture the attention of style lovers: It’s all about the shoes.

To accompany her floral dress, Sevigny wore distinctive Loewe Rose Heeled Sandals, which feature two black straps across the foot and an upside-down rose-shaped heel. That’s right. The heel of Sevigny’s shoe was a thorny flower stem while the portion of the heel touching the ground was a petaled blood-red bloom. These unique strappy mule heels — which are an inarguable, yet polarizing, show-stopper — clock in at $1,600. The Loewe Rose Heeled Sandals are currently available at Nordstrom.

Sevigny paired the look with thick gold hoops, a gold bangle bracelet, and a gold ankle bracelet. Her signature blond hair was slicked to her head in a faux-mullet style with a stark middle part. Keeping her glam simple, Sevigny went for a simple flushed makeup look with lots of blush and a coral lip to match her dress.

During her appearance, Sevigny discussed her roles in “The Girl from Plainville” on Hulu, which launched its first episode on March 29, and the second season of “Russian Doll,” which premiered on April 20 on Netflix. The star also discussed her experience becoming a mom during the pandemic.