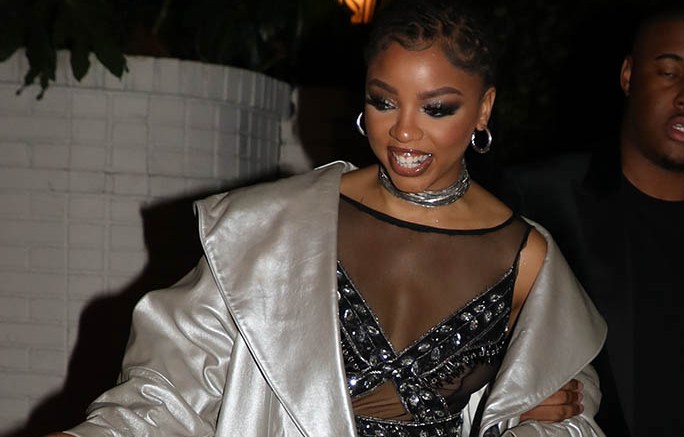 The Oscars might be Hollywood’s biggest night, but the after-parties are just as legendary. Following the 2022 Academy Awards, Chloe Bailey and several A-listers made their way to Vanity Fair’s annual Oscars party; shortly afterward big names headed to Jay-Z and Beyonce’s post-awards shindig. The high-profile party, which was held at the Chateau Marmont Hotel in West Hollywood, Calif., attracted a top notch guest list including stars like Rihanna, Reese Witherspoon, Kim Kardashian, Saweetie, Diddy, Michael B. Jordan and Lori Harvey.

Bailey made a serious style statement at the star-studded affair. The “Have Mercy” singer stepped out in a sheer black dress. The sleeveless form-fitting number was embellished with crystals throughout and streamlined with sequins on the lower half. The garment also included sheer see-through fabric on the chest and a risky cutout at the back.

To amp up her look, the R&B songstress teamed her dress with a silver trench coat and accessorized with hoop earrings and a layered choker necklace. Bailey styled her hair in a long straight ponytail and added shimmery silver eyeshadow with her signature nude lip.

The “Grown-ish” actress rounded things out with black platform sandals. The open-toe silhouette included a chunky outer sole and a high stiletto heel.


The 2022 Academy Awards — also known as the Oscars — celebrates the top talents across the film industry. This year’s event, held at the Dolby Theater in Los Angeles, was hosted by Amy Schumer, Regina Hall and Wanda Sykes.

If you missed the Oscars, you can watch it on streaming services like Hulu+ Live TV, Fubo TV, and YouTube TV.