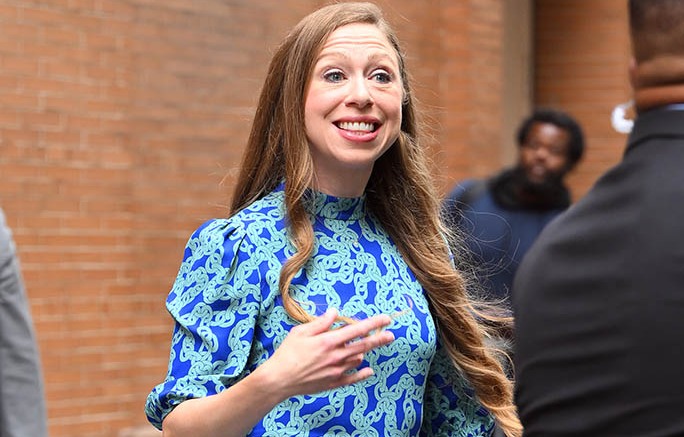 Chelsea Clinton was bursting in color during her latest outing. The daughter of Bill and Hillary Clinton was spotted leaving ABC studios after making an appearance on “The View” in New York City on Wednesday.

Chelsea made a bold fashion statement while appearing on the morning talk show. The 42-year-old writer stepped out in a breezy blue dress that featured a royal blue print throughout. The garment had a mock neck, puffy short sleeves, fitted waist and slightly ruffled hem.

Chelsea parted her hair on the side and let her long curly tresses cascade down her back. For glam, she went with soft pink eyeshadow and a glossy neutral pout. To let her look do all of the talking, she opted for minimal accessories.

When it came down to the shoes, Chelsea completed her look with a set of nude pointed-toe pumps. The shoe style had a sharp pointed-toe, a high counter at the back for extra support and a thin stiletto heel.

Chelsea has been making rounds to promote her new Apple TV+ documentary “Gutsy,” which is based off of the book they wrote called “The Book of Gutsy Women.”

Shop nude pointy-toe heels below to add a sleek finish to any outfit.