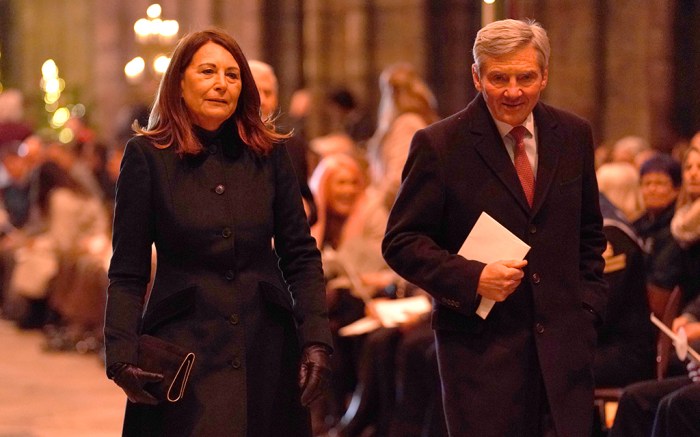 Carole Middleton buttoned up to join her daughters Pippa Middleton and Kate Middleton, Princess of Wales, at the “Together at Christmas” carol service last night. The event, held at Westminster Abbey in London, is a holiday special attended by royal family members including her son-in-law Prince William, Camilla, Queen Consort and King Charles III.

Carole arrived at the event alongside her husband Michael Middleton and Pippa. Carole was dressed in a deep blue coat from Hobbs with buttons running down the front. It’s likely that the colorful outerwear was layered overtop a formal dress.

The 67-year-old completed her outfit with a pair of dark blue suede booties. A go-to shoe style for many, ankle boots like Carole’s booties are extremely versatile shoes that can feature a variety of heel styles. Boots that stop at the ankle can be practical, dressy, casual, minimal, showy and more.

Kate Middleton’s “Together at Christmas” concert is a holiday carol service held at Westminster Abbey, attended by royal family members including Prince William, Camilla, Queen Consort and King Charles III. The second annual occasion will find the Princess of Wales paying tribute to the late Queen Elizabeth II, broadcast in the United Kingdom on ITV1 on Christmas Eve. The broadcast will include an introduction from Middleton, as well as performances by musicians including Melanie C., Alfie Boe and Samantha Barks.
PHOTOS: Kate Middleton’s ‘Together at Christmas’ at Westminster Abbey: Royal Members & Celebrity Arrivals