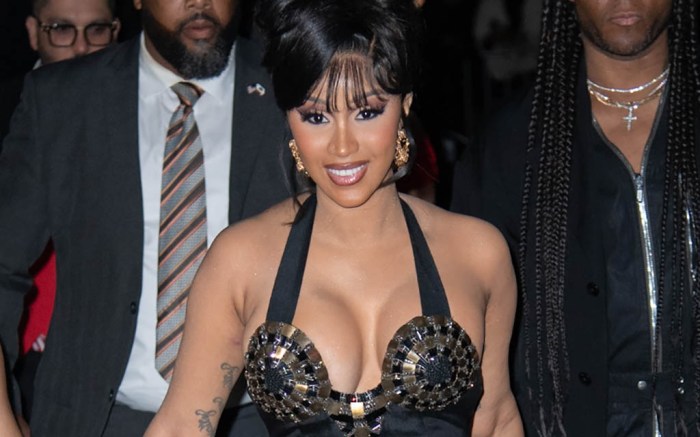 Cardi B went from dripping gold at the Met Gala to slipping into a sleek black dress for the after-party in New York last night.

The musician’s look exuded elegance. She stepped out in a fitted black gown with a mermaid-style silhouette. The dress featured a halter neck strap with a scoop neckline. The straps led into shiny gold and silver embellished detailing. The sparkly tabs at her chest also featured a long dangling beaded detail at the center of the dress. The frock draped down to her feet and featured a pleated finish.

When it came to accessories, the “Bodak Yellow” rapper wore a pair of gold earrings that matched the detailing of her dress.

Though the star’s dress covered most of her footwear, the front of her gold platform pumps could be seen peeking out beneath her frock. The open-toe shoes featured a metallic gold finish and a chunky block sole.

For the main event earlier in the 29-year-old brought the Gilded Age theme to life in a custom Versace gown with matching arm warmers and neck accessories that created the appearance of dozens of necklaces layered on top of one another.

Flip through the gallery to see more red carpet arrivals at the Met Gala.