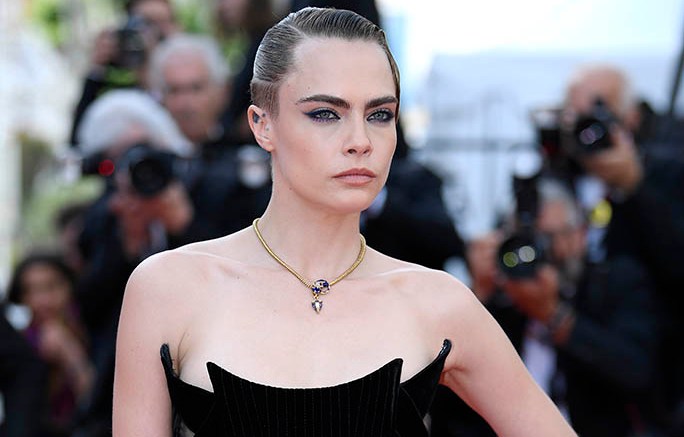 Cara Delevingne had all eyes on her as she arrived at the premiere of “L’innocent (The Innocent)” during the 75th annual Cannes Film Festival in France today. The FN cover star was joined on the red carpet by French fashion designer and creative director of Balmain Olivier Rousteing.

Delevingne commanded attention in a form-fitting black gown by Balmain. The strapless slick number boasted a curved bust line with sharp points and mesh square cutouts that appeared throughout. The details didn’t stop there, the bottom of the garment flowed into a long dramatic velvet train.

To place emphasis on her dress, the English model slicked her hair back and accessorized with a gold choker necklace and sheer gloves. Rousteing went monochrome in an all-white outfit that consisted of a fashionable blazer jacket with baggy wide-leg pants and towering platform shoes.

Unfortunately, Delevingne’s footwear was not visible but it would be no surprise if she rounded out the look with a platform silhouette, sleek pumps or strappy sandals.