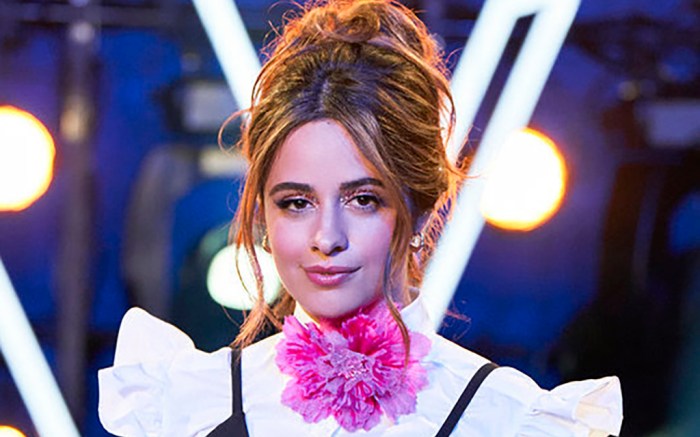 Camila Cabello is the newest addition to the talented judge panel on season 22 of the ever popular television show “The Voice.” Alongside returning judges Gwen Stefani, Blake Shelton, and John Legend, Cabello, dressed in a flouncy ensemble while she pressed buttons, turned chairs, and won over singers in the episode which aired on Sept. 19 on Peacock and NBC.

The “Havana” songstress wore a white high collared long sleeve button up adorned with voluminous ruffles on either of Cabello’s shoulders. The whimsical shirt was tucked into a strappy black maxi dress featuring a plunging neckline and a ruffled tier running round the former “X Factor” contestants’ waist. Beneath the ruffled waistline laid a fitted pencil style skirt, while a zipper in gold ran up the front of the lengthy garment keeping it closed.

Cabello accessorized with plenty of silver rings, small dangling studs, and a large pink flower that was reminiscent of “Sex And The City’s” Carrie Bradshaw, which she wore just below her buttoned-up collar much like a bow tie. The floral addition offered the black and white ensemble a vibrant pop of much needed color.

The former Fifth Harmony member wore her chestnut locks out of her face in a messy updo with face-framing strands. Cabello’s makeup was as it usually is, slightly smokey and nude with a pink pop of color.