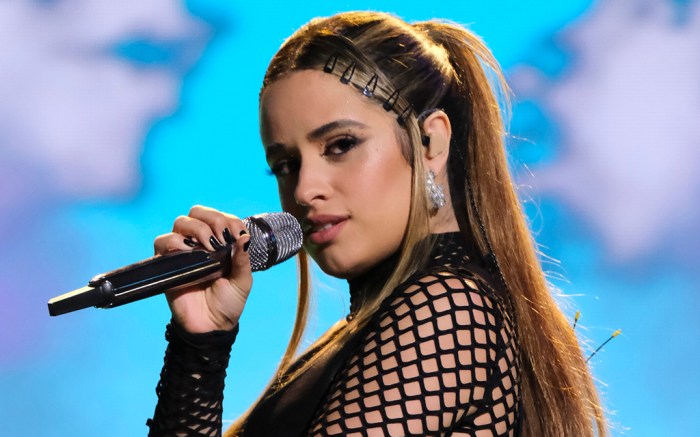 Camila Cabello went for a bold silhouette during a new elimination episode of NBC’s “The Voice.” The judge returned to coach her team in the singing competition, which aired yesterday. The former Fifth Harmony member resembled a multi-tiered confection, her outfit paired alongside glossy black platform boots.

Cabello’s ensemble consisted of a black mesh see-through shirt that was layered underneath a black leather halter-style bra top for extra coverage. For a statement-making addition, the “She Loves Control” singer stepped into a light blue maxi skirt that had the star almost completely covered in gathered voluminous ruffles.

The high-waisted item mimicked the look of a blooming flower that gave Cabello a boxier shape thanks to the sheer mass of fabric.

As for accessories, the “Cinderella” actress stacked on silver rings and glittering earrings that sparkled. Cabello’s hair was parted in the middle and styled in a sleek ponytail, fastened in place with little black clips that kept her front-facing bangs at bay.

On her feet, Cabello stepped out in black pointed-toe ankle boots fitted with thick block heels, sky-high platforms and a sturdy construction. A go-to shoe style for many, ankle boots are extremely versatile shoes that can feature a variety of heel heights for endless styling possibilities.

For footwear, Cabello often gravitates towards a wide range of styles. The Cuban-born star often dons Nike’s Juvenate, Dunk Low and Blazer Mid 77 sneakers. She’s also known for sporting Adidas kicks, in addition to affordable slides and sandals by Franco Sarto, Birkenstock and Steve Madden. The singer often pairs these with dresses, tops and bottoms by affordable brands like H&M, Forever 21, and Zara, in addition to high-end labels like Dolce & Gabbana, Isabel Marant, and Versace.