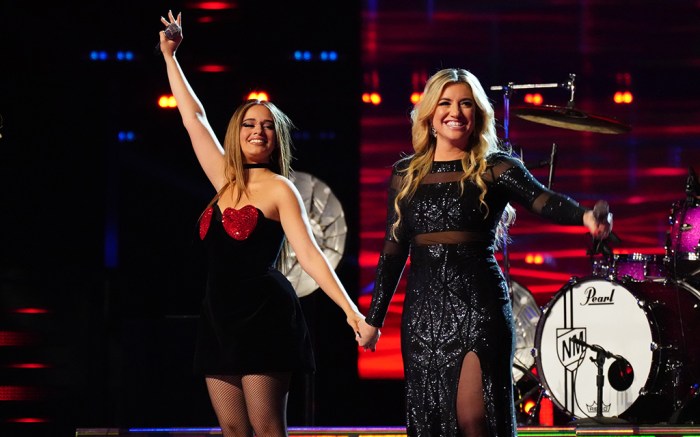 Camila Cabello sang her heart out on the second part of “The Voice” live season 22 finale, which aired yesterday. Cabello coached Morgan Myles up to the finale, but Bryce Leatherwood took home the season’s win alongside Blake Shelton.

Cabello took to the stage with Myles for a duet performance of “Never Be The Same,” the pop star clad in a black minidress with heart-shaped accents. The dress was a simple strapless style that was spiced up with the addition of bright red sequined red hearts on the bodice.

Cabello wore a black choker necklace and matching fishnets that offered her ensemble a grunge element. The “Cinderella” actress wore her hair straightened set in a middle part and completed her edgy outfit with graphic black eyeliner.

Taking her ensemble to new heights, Cabello donned a pair of black suede platform ankle boots. The style features chunky soles and a block heel of at least 6 inches that had the performer towering over the crowd. Platforms are a popular choice because of their height-boosting abilities, making them the perfect sky-high addition to any ensemble.

The platform shoe trend is one of the easiest styles to incorporate into any wardrobe. It is one of the most sought-after shoe styles and can be found in a range of styles from brands like Gucci, Valentino, and Burberry.

For footwear, Cabello usually gravitates towards a wide range of styles. The Cuban-born star often dons Nike’s Juvenate, Dunk Low and Blazer Mid 77 sneakers. She’s also known for sporting Adidas kicks, in addition to affordable slides and sandals by Franco Sarto, Birkenstock and Steve Madden. The singer often pairs these with dresses, tops and bottoms by affordable brands like H&M, Forever 21, and Zara, in addition to high-end labels like Dolce & Gabbana, Isabel Marant, and Versace.